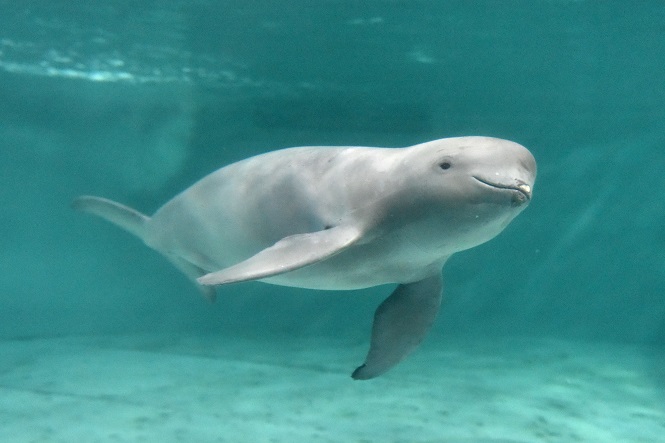 CHANGWON, June 1 (Korea Bizwire) — Measures are being called for as a growing number of finless porpoises, an endangered species also known as ‘smiling dolphins’, are being found dead.

Last Friday, a dead porpoise was found on the coast of Yeosu, South Jeolla Province, only a day after another one was found dead near the area.

On May 25, a dead porpoise swept up on the shore of Namhae County, South Gyeongsang Province.

A dead porpoise found drifting in the sea near Tongyeong, South Gyeongsang Province last month had fishing lines tangled on the right fin and the tail. A metal detector sensed that a fishing hook had cut into the porpoise’s body.

Finless porpoises are a smaller kind dolphin found in South Korea’s West and South Sea, now classified as an endangered species after suffering from a drastic drop in numbers in recent years.

Most of them are killed in bycatch, particularly by stow nets, a trap device that catches fish by pointing the net’s opening towards the direction of the incoming tidal current.

As porpoises are swept away by the current, they end up in the rear end of the stow net, and are unable to escape.

The National Institute of Fisheries Science is currently developing a guidance system that can be attached to the stow nets to help porpoises escape, but it has yet to be commercialized.

Even if the system is introduced, it is being questioned if those in the fishing industry would spend more money to buy them.

“The Ministry of Environment or the Ministry of Oceans and Fisheries should come up with a budget to subsidize fishermen purchasing these nets in order to reduce the threat against the marine ecosystem,” said Prof. Jeong Woo-geon from Gyeongsang National University.

Other alternatives include attaching reflected sound generators or visual signal devices on the fishing gear to prevent bycatch.

“The United States saw a 90 percent reduction in bycatch of porpoises in the bays of Maine after requiring fishermen to attach the so-called ‘pingers’, a device that shoots reflected sound, on their fishing gear,” said Lee Young-ran, head of marine conservation at the WWF Korea.