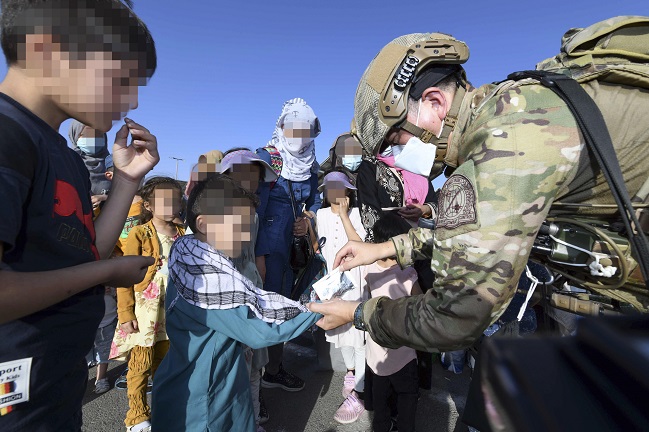 A South Korean soldier of an Air Force’s special forces unit gives out snacks to Afghan children, before they and their parents are flown out of Kabul on a military plane in an evacuation operation to bring a total of 391 Afghans who worked for the South and their families to Seoul, in this photo provided by the Air Force on Aug. 26, 2021.

The Office for Government Policy Coordination under the Prime Minister’s Office said in the document submitted to Rep. Tae Young-ho of the main opposition People Power Party that its committee handling the development aid has reached the decision on the 2022 ODA budget for Kabul, according to Tae’s office.

Of the amount, the foreign ministry plans to provide Afghanistan with 18.4 billion won through international organizations.

“The Afghanistan ODA budget has yet to be finalized in detail. We will review the size and the areas of support as we watch the situation in Afghanistan and the discussions that will take place on the humanitarian assistance at the U.N. General Assembly,” a foreign ministry official said.