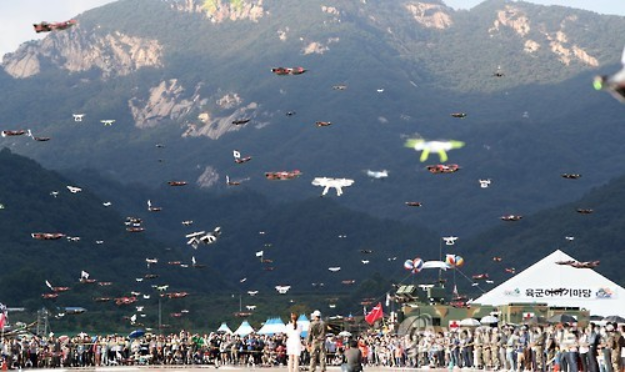 A group of 300 drones flies at a military festival at South Korea’s military headquarters Gyeryongdae, near Daejeon, 164 kilometers south of Seoul, on Oct. 3, 2016. (Image courtesy of Yonhap)

”We’re planning to make a full-fledged research on applying military swarming, which is already in operational use in the United States, China and Russia, to our ground and naval operations,” the official said.

Military swarming is a battlefield tactic designed to make dispersed combat units intensively attack designated targets all at once.

The research is intended to determine the possibility of the military use of AI-based drones and realize the concept of Korean-style swarming warfare by reflecting current science and technology, the official said.

If the outcome of the research, due later this year, is positive, the Army will reportedly weaponize drones in the long term.

The research will focus first on analyzing the effects of drone swarming on naval operations, including port defense, attacking, search and rescue, and lighting, according to the official.

In January, the U.S. Defense Department said it successfully conducted an operational test, in which 103 Perdix drones were dropped from three F/A-18 Super Hornet fighter jets. Perdix are a mere 16 centimeters long.

China also disclosed an image of the flight of scores of mini-drones in November, and Russia is also known to be studying ways for fighter-drone joint operations.

The South Korean Army thinks that drones similar with the specifications of the Coyote drone, developed by Raytheon, a leading U.S. defense contractor, and successfully tested by the U.S. Navy in 2015, can be fully used in operations. The American drone, which can carry up to a 1-kilogram load, can fly for up to 1 1/2 hours at a maximum speed of about 100 kilometers per hour.