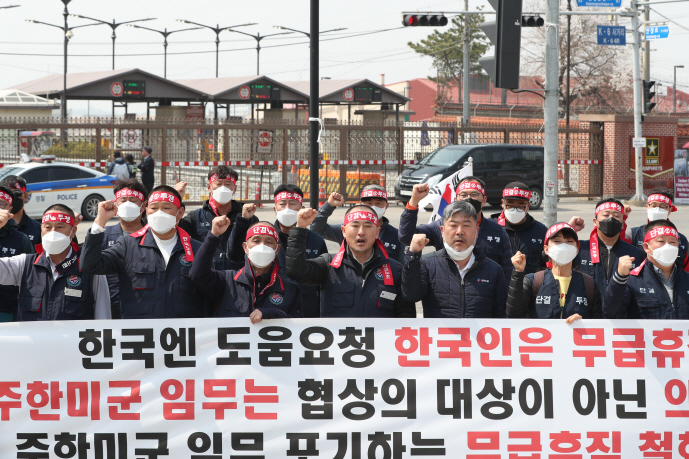 Members of a union representing South Korean employees of the U.S. Forces Korea rally at the entrance of the U.S. base Camp Humphreys in Pyeongtaek, south of Seoul, on April 1, 2020, to demand that the United States revoke its implementation of unpaid leave for such employees. (Yonhap)

SEOUL, April 26 (Korea Bizwire) — South Korea has notified the United States of its plan to pay wages in advance for its citizens who work for the U.S. Forces Korea but have been furloughed amid a deadlock in their defense cost-sharing negotiations, a government source said Sunday.

Around 4,000 employees were furloughed indefinitely starting on April 1, as Seoul and Washington have failed to bridge differences over a new Special Measures Agreement (SMA) that stipulates how much Seoul would pay for the upkeep of the 28,500-strong USFK.

“The South Korean government is pushing to pay wages for those workers first, and then deduct the amount from its due payment to the U.S. under the SMA framework,” the Seoul source said.

About 70 percent of their salaries could be provided if the government maximizes the country’s employment insurance program, the source said, adding the idea was conveyed to the U.S. side, and the Seoul government is waiting for its response.

According to the Labor Standard Act, employers should pay non-duty allowances to employees of at least 70 percent of their average wages when they take a leave of absence.

But this cannot be implemented if the U.S. raises an objection, as the South Korean workers are hired by the U.S. military.

South Korea has sought diverse measures to support the livelihood of the affected workers, such as extending emergency loans.

During the latest and seventh round of talks last month, South Korea proposed concluding a separate agreement to first address the wage issue, but the U.S. rejected the idea over concerns that such a move could further delay a comprehensive deal, Seoul’s top negotiator Jeong Eun-bo has said.

Uncertainty over the negotiations was renewed last week, as U.S. President Donald Trump said he had rejected Seoul’s offer regarding the SMA deal.

The U.S. initially demanded a more than fivefold increase in Seoul’s contributions to US$5 billion.

The indefinite furloughs are feared to have disrupted day-to-day USFK operations and affected the allies’ combined readiness posture.