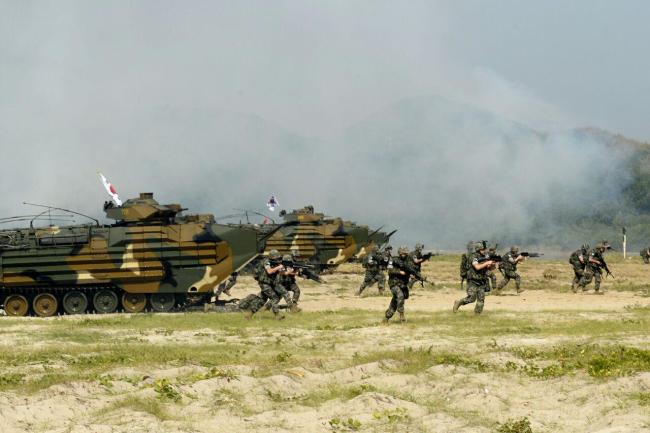 SEOUL, Feb. 9 (Korea Bizwire) — The South Korean military has been reconsidering whether to participate in an upcoming multinational military exercise in Thailand as the new coronavirus continues to spread, officials said Sunday.

The 39th Cobra Gold exercise, co-sponsored by the Thai and U.S. armed forces, is scheduled to be held from Feb. 26 through March 6.

The annual exercise is expected to be joined by more than two dozen countries, including Japan, Singapore and Indonesia. Last year, China and India also participated in civic action parts of the exercise.

Initially, the South Korean Navy and the Marine Corps planned to send about 400 service personnel as well as eight assault amphibious vehicles, and a naval ship carrying them is supposed to leave for the Southeast Asian country on Saturday.

“But we have been reviewing an option of either skipping the exercise or sending fewer soldiers or weapons,” a military official said, adding that the authorities have been closely monitoring developments regarding the new coronavirus.

“The military authorities delivered their opinion to the defense ministry, and the ministry will make the final decision this week,” another official noted.

Launched in 1982, Cobra Gold is the largest international military exercise held in the Asia-Pacific region. South Korea began to attend it in 2010.

As of 6 p.m. Friday, South Korea has 24 confirmed cases of the virus. More than 630 people have died in China, and over 31,000 have been confirmed infected. Thailand has also reported 25 confirmed cases.

Due to the outbreak, the South Korean Air Force’s Black Eagles announced its decision last week not to attend the biennial Singapore Airshow 2020 planned next week as part of “efforts to prevent the spread of the novel coronavirus and to guarantee the safety of service personnel.”