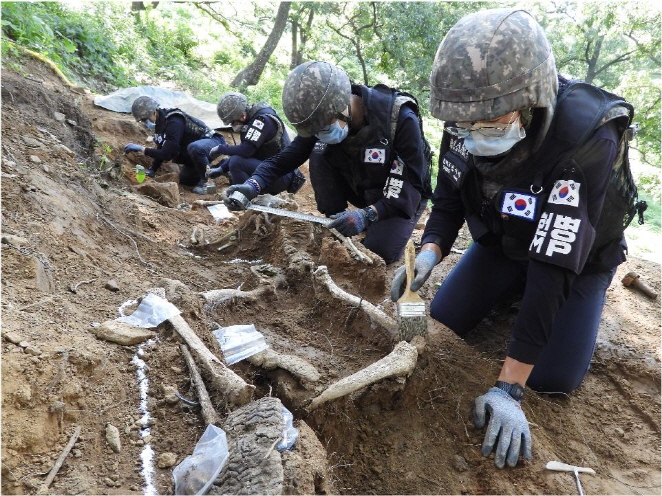 Soldiers excavate the remains of war dead at Arrowhead Ridge, a site of fierce battles during the 1950-53 Korean War, inside the Demilitarized Zone (DMZ) in the border county of Cheorwon, in this photo provided by the defense ministry on April 19, 2020.

SEOUL, April 20 (Korea Bizwire) — South Korea resumed excavating remains on its own of soldiers killed during the 1950-53 Korean War in the Demilitarized Zone (DMZ) Monday, the defense ministry said, as Pyongyang remains unresponsive to calls to work together as agreed.

Under a bilateral military accord signed Sept. 19, 2018, the two Koreas agreed to launch a joint excavation project on Arrowhead Ridge, one of the fiercest battlefields during the war.

But the South carried out the project alone last year, as the North did not respond to calls for joint work.

“A slew of the Korean war dead still remain buried inside the DMZ, including Arrowhead Ridge. It is our noble duty to bring those heroes back to their families,” said Maj. Gen. Lee Sang-chul, who leads the 5th Division of the Army in charge of the mission.

“Based upon experiences and thorough preparations, we will continue our operations in a perfect manner while maintaining a full readiness posture,” Lee added.

Last year, the military discovered 2,030 bone pieces believed to belong to about 261 troops killed in the war.

The defense ministry vowed to make continued efforts to encourage North Korea to join the project.

The military accord, named the Comprehensive Military Agreement (CMA), was signed during an inter-Korean summit held in Pyongyang designed to reduce tensions and build trust between the two sides.

Under the CMA, the two sides set up ground, maritime and air buffer zones, disarmed the Joint Security Area and removed some border guard posts.

But many other promises have not been fulfilled, as Pyongyang is lukewarm about the accord, which appears to be due to little progress in its denuclearization talks with Washington. 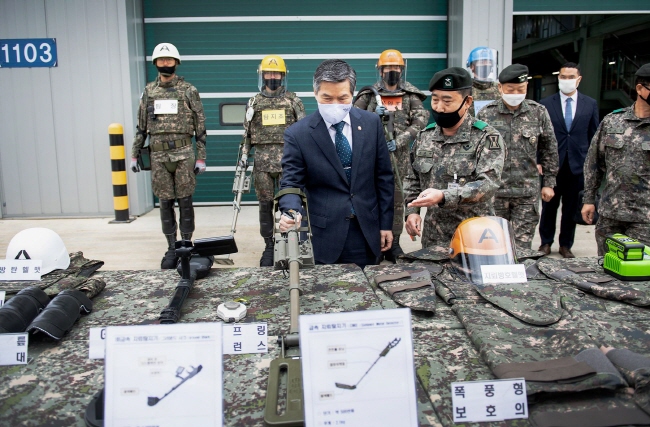 Defense Minister Jeong Kyeong-doo (L) checks equipment used to clear land mines while visiting a site of the removal project in Gyeonggi Province on April 20, 2020, in this photo provided by his office.

Meanwhile, Defense Minister Jeong Kyeong-doo visited one of the sites where mine removal work was under way, and checked safety measures and operational procedures, according to his office.

Earlier this month, the authorities launched the operations to search and clear mines around 36 air defense bases across the country to promote local residents’ safety and convenience.

After completing the work by the end of next year, the government plans to create trekking courses in those areas.

“Minister Jeong appreciated the service members’ hard work and called for prioritizing safety in carrying out the operation,” the ministry said in a release.

South Korea buried tens of thousands of mines near air defense units across the country to protect those facilities between the 1960s and 1980s.

The military has been working to remove them since around 1998, and around 3,000 are believed to remain unaccounted for, according to defense ministry officials.