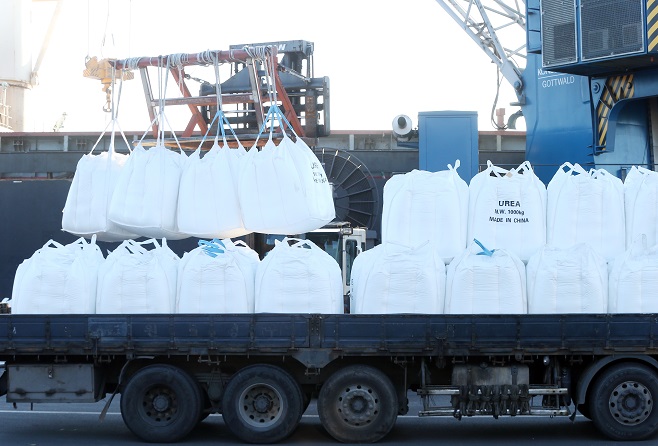 A Chinese freighter unloads 3,000 tons of urea solution for cars at a quay in Ulsan, 410 kilometers southeast of Seoul, on Dec. 2, 2021, in the wake of China’s sudden export curbs on the material that caused chaos in the country’s transportation and logistics sector. (Yonhap)

SEOUL, Dec. 7 (Korea Bizwire) — South Korea will be able to import around 120,000 tons of urea per year from Indonesia over the next three years, a move expected to help prevent a supply crunch of the key industry material here, Seoul’s industry ministry said Tuesday.

The agreement was made as Seoul’s Industry Minister Moon Sung-wook and Indonesia’s State-Owned Enterprises Minister Erick Thohir signed a memorandum of understanding (MOU) meant to boost bilateral cooperation in the urea supply earlier in the day.

South Korea has been working to diversify import channels of urea, which is needed to make a key fluid for diesel cars to cut emissions, to ensure its stable supply chains following a recent supply shortage upon China’s export curbs in October to ease its domestic supply bottlenecks.

Under the agreement, Indonesia will ship around 120,000 tons of urea per year to South Korea over the next three years.

The amount is tantamount to around one-third of Seoul’s total yearly imports volume, as Seoul has bought an average of 370,000 tons of urea for industrial use each year.

As the first batch, Indonesia agreed to send 10,000 tons of urea in mid-December, which is expected to arrive here early next month at the latest, the ministry said.

“Indonesia is a nation that can be our stable supplier of urea given its production volume, the level of bilateral economic exchanges and geographical proximity,” the ministry said in a statement.

“The two countries agreed to further boost cooperation on the overall supply chains down the road.”

More than 97 percent of South Korea’s urea imports came from China in the first nine months of this year, underscoring its heavy reliance on the neighboring country for the key material.