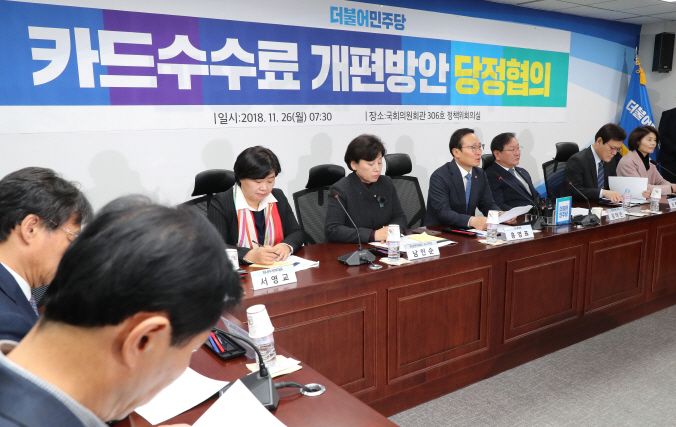 The move came as small businesses are feeling the pinch the most amid the economic downturn and the government’s hikes in minimum wages.

After a meeting, government and DP officials said that they’ve decided to expand the scope of shop owners entitled to preferential rates.

“The government and the DP saw the need to ease business challenges for small shop owners amid sluggish domestic demand and to overhaul the card commission scheme for fair burden sharing,” Kim Tae-nyeon, the DP’s chief policymaker, told reporters after the meeting.

“There is also a need to improve a related system to help enhance card companies’ competitiveness as the industry faces high costs amid excessive competition,” he added.

Under new measures, the participants agreed to lower rates for business owners who registered more than 500 million won (US$441,501) in yearly sales and so are not entitled to preferential rates.

They are paying as high as 2.3 percent to credit card firms, much higher than department stores or large discount chain operators.

Under new measures, the self-employed whose annual sales stand between 500 million won to 1 billion won will pay 1.4 percent to card firms from the current 2.05 percent.

The rate will be lowered to 1.6 percent from 2.21 percent for business operators with yearly sales worth between 1 billion won and 3 billion won.

If implemented, about 2.5 million shops with annual sales less than 3 billion won are expected to pay lower commissions. The number of beneficiaries will account for 93 percent of the total.

The measures, however, are expected to worsen the bottom line of card companies, given that commission incomes make up a large portion of their earnings.

In this vein, the government said that it will draw up measures to allow card firms to do consulting services to help them diversify their sources of income.

“An overhaul in the card commission system will negatively affect the card industry’s profitability in the short term. But we expect that the move will help improve the sector’s soundness over the long haul,” Kim added.