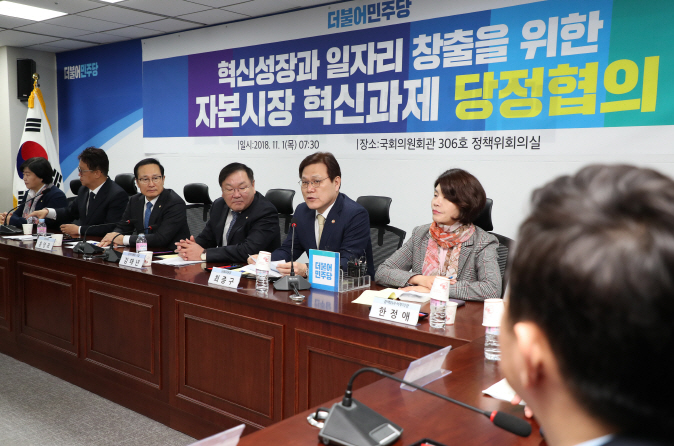 Officials from the government and the ruling Democratic Party holding a meeting to discuss ways to revitalize the capital market on Nov. 1, 2018. (image: Yonhap)

Government and DP officials held a meeting to discuss ways to rev up the capital market as non-listed, venture firms are having difficulty in raising funds despite ample liquidity.

“There is a need to enhance the capital market system to induce funds into promising non-listed companies and venture firms,” Hong Young-pyo, the DP’s floor leader, said at the start of the meeting.

The move came as the Moon Jae-in government seeks to spur the innovation-based growth in order to boost job creation amid the slowing economy.

The government and the DP agreed to overhaul the capital-raising system, including easing rules on public offerings with small volumes and privately placed bond issuance.

Currently, a company is allowed to offer shares worth up to 1 billion won (US$876 million) without submitting a registration statement to the regulator.

Authorities decided to raise the threshold to 3 billion won and 10 billion won with beefed-up measures to protect investors.

They will also permit the establishment of business development companies (BDCs), entities focusing on investing in non-listed firms or companies listed on South Korea’s tertiary bourse, the KONEX.

The government and the DP also agreed to ease the threshold for creating PEFs and the rule on the stake ownership of such funds.

The move is aimed at facilitating fund-raising and providing domestic PFEs with “level playing fields” versus foreign rivals.

“Reforms in the capital market will buttress the government’s policies of innovative and income-driven growth,” he said.

“This will help South Korea’s stock market become an attractive investment destination that will be not be swayed heavily by risk factors at home or abroad,” Kim noted.