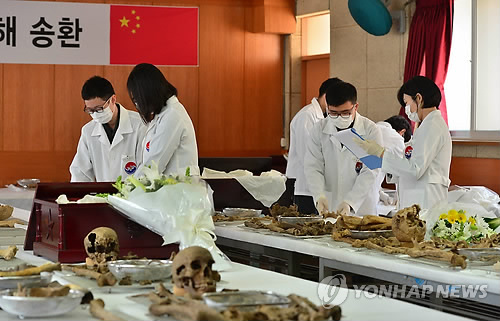 The remains will be sent to the southeastern city of Shenyang for reburial in a state cemetery for war dead, according to the ministry officials. (image: Yonhap)

SEOUL, March 20 (Korea Bizwire) — South Korea returned the remains of 68 Chinese soldiers killed during the 1950-53 Korean War to China on Friday for final burial in their homeland, the defense ministry here said.

During a solemn ceremony at Incheon International Airport, South Korean soldiers handed over the coffins, draped in red Chinese flags, to the Chinese side in a symbolic gesture of friendship toward its former battlefield foe.

The remains will be sent to the southeastern city of Shenyang for reburial in a state cemetery for war dead, according to the ministry officials.

It is the second such repatriation, with the first for the remains of 437 fallen soldiers taking place last year after South Korean President Park Geun-hye made the offer during a 2013 summit, which was welcomed by Beijing.

Most remains had been recovered from front-line areas in Gangwon Province over the past year, where fierce battles took place during the three-year conflict, the officials said.

“The repatriation is expected to bring the relations between South Korea and China a notch higher and heal wounds of the war, as well as to be a chance to contribute to regional peace, stability and joint prosperity,” the ministry said in a statement.

During the inter-Korean war, China fought alongside North Korea against the U.S.-backed Allied forces. Historical records show that more than 1 million Chinese soldiers were killed in the three-year conflict.

The conflict ended in a cease-fire, not a peace treaty, leaving the two Koreas still technically at war.