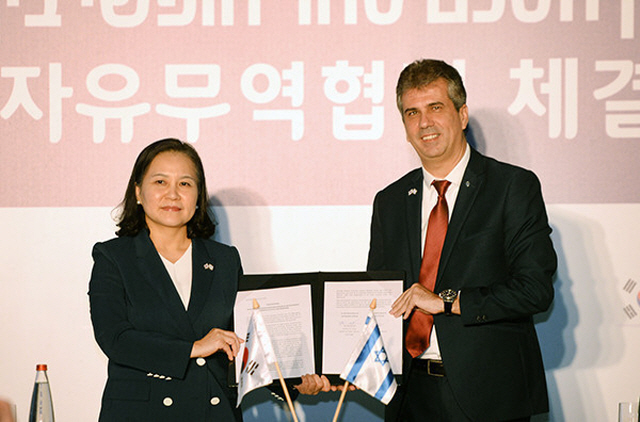 South Korea’s Trade Minister Yoo Myung-hee (L) and Israel’s Minister of the Economy and Industry Eli Cohen pose for photos after agreeing to a bilateral free trade agreement in Jerusalem on Aug. 21, 2019. (image: Ministry of Trade, Industry and Energy)

SEOUL, Aug. 21 (Korea Bizwire) — South Korea struck a free trade deal with Israel as part of efforts to strengthen economic ties with the Middle East country and cope with the growing protectionism around the globe, Seoul’s trade ministry said Wednesday.

In Jerusalem, South Korean Trade Minister Yoo Myung-hee and her counterpart Eli Cohen declared their bilateral free trade agreement (FTA) around three years after the two held the first round of negotiations in 2016.

The deal is expected to take effect in the first half of 2020, as it still needs to go through a legal review, a signing ceremony and the respective parliament’s ratification, according to the ministry.

Seoul’s exports to Israel were estimated at US$1.44 billion in 2018, up 14 percent from a year earlier, according to the ministry.

Asia’s fourth-largest economy enjoyed a trade surplus of $177 million in trade with Israel in 2018.

The FTA is expected to help South Korea expand exports of automobiles, auto parts, textiles and cosmetics to Israel, whose tariffs will be immediately lifted when implemented, the ministry said.

Automobiles account for roughly half of South Korea’s shipments to Israel, followed by synthetic resins and video equipment, according to the data compiled by the Korea International Trade Association.

But barriers on sensitive agricultural goods, including rice and garlic, will be still maintained despite the FTA, the ministry said, although tariffs on Israeli grapefruits will be abolished in seven years.

Other potential areas in which the two nations can cooperate deeper include aviation, health care, renewable energy and IT industries, the ministry added.

The two countries also vowed to open up the service and investment segments, and provide more leeway beyond the General Agreement on Trade in Services under the World Trade Organization.

The FTA, meanwhile, will not cover Palestinian territories, the ministry said.

The agreement is also significant as South Korea will become the first Asian FTA partner of Israel, helping the country take a competitive edge, it stressed.

The FTA with tech-savvy Israel came at a time when Japan declared a trade war against South Korea by restricting exports of vital industrial materials starting last month, a move that can deal a harsh blow to local semiconductor and display makers.

South Korea has been making efforts to expand the number of FTA partners, especially amid the looming protectionism around the globe, sparked by the trade dispute between the United States and China.