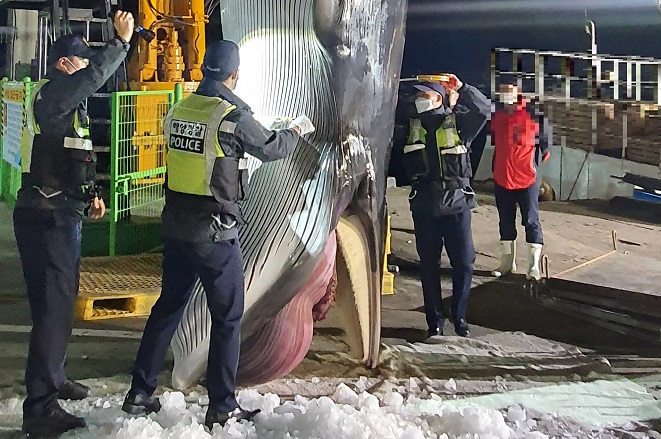 This file photo released by the Boryeong Coast Guard on April 22, 2021, shows a whale that was caught by accident by a fishing boat in in Gunsan, North Jeolla Province.

SEOUL, May 11 (Korea Bizwire) — South Korea’s oceans ministry on Tuesday rolled out tougher regulations on sales of whales in line with its efforts to curb illegal whaling activities in local waters.

Under the new rule, all whales captured illegally will be destroyed, according to the Ministry of Oceans and Fisheries. Previously, hunted whales were seized by local authorities and were later put up for public sale.

“The revisions came in line with the global trend to bolster regulations to protect whales and ban trade of endangered species,” the ministry said.

Whales found ashore will also be banned from being sold and can only be used for education and research purposes.

The ministry added that by-catch whales, which refer to those caught by accident, can only be sold when the fishing activity was legal.

South Korea has been making efforts to curb commercial whaling activities as a member of the International Whaling Commission.