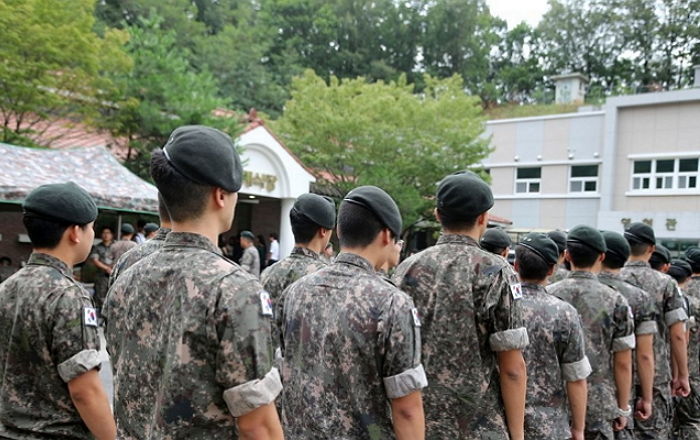 In accordance with the revision, troubled soldiers shall be subject to special education and training programs on the military spirit and service rules for a maximum 15 days. (Yonhap)

The move comes after parliament passed a revision of the Military Personnel Management Act earlier this month, which calls for the abolishment of guardhouses and the establishment of additional educational programs instead to discipline soldiers.

The revision will come into effect six months after passage.

Under the current guardhouse system, rank-and-file soldiers who commit wrongdoings can be sent to military confinement facilities for up to 15 days at a time following the decision by a military disciplinary committee.

As it has been a source of controversy over human rights violations for limiting conscripts’ personal liberty, the ministry began to push for its abolishment in 2018 as part of its military reform drive and submitted the law revision last October.

In accordance with the revision, troubled soldiers shall be subject to special education and training programs on the military spirit and service rules for a maximum 15 days.

They also could face a cut in their monthly pay for up to three months or a reduction in their vacation days of up to five days at one time.

Any incarceration of soldiers will only be possible through an official court trial, and those found guilty while being in service will be put in a military prison, not any other confinement facility, according to the officials.

“It will be a landmark case that will help improve soldiers’ rights,” Defense Minister Jeong Kyeong-doo said earlier.

“We have been working to come up with follow-up measures to prevent the decision from causing discipline to slacken.”