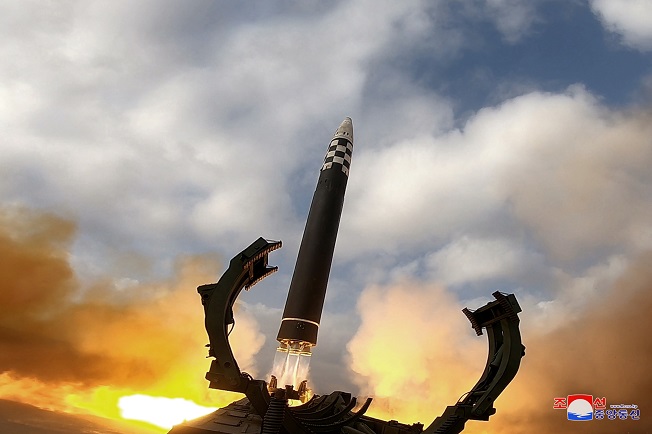 According to the source, the South will participate in the session, to be held in New York on Monday (local time), as a country directly involved in the issue.

South Korea currently is not one of the 10 non-permanent members of the U.N. Security Council.

Under the UNSC’s Provisional Rules of Procedure, non-member countries can be invited to participate in certain circumstances, though they are not allowed to cast a vote.

The European Union strongly condemned the North’s launch of an ICBM that landed in Japan’s exclusive economic zone Friday and voiced deep concerns over such “dangerous, illegal and reckless action.”

“It is critical that the United Nations Security Council responds in an appropriate manner in order to address the growing threat the DPRK poses to international peace and security,” the EU said in a statement, referring to North Korea by its official name, the Democratic People’s Republic of Korea.

The Rodong Sinmun, the official newspaper of the North’s ruling Workers’ Party, on Sunday claimed in an editorial that the North has developed the strongest ICBM on the planet.

Pyongyang will continue to strengthen its nuclear weapons unless the U.S. withdraws its “hostile policies” against the North, it added.

“The weight we carry as a country that possesses the strongest intercontinental ballistic missile on the planet is truly immense,” it said.

“This is an overwhelming title that shows that the right to a preemptive nuclear strike is not exclusive to the U.S. and clearly proves to the world we are undeniably a nuclear power with the strength to confront the U.S. nuclear hegemony.”

On Friday, North Korea fired a Hwasong-17 ICBM, which is known to carry multiple warheads and have a range of around 15,000 kilometers, a range long enough to reach the continental United States.