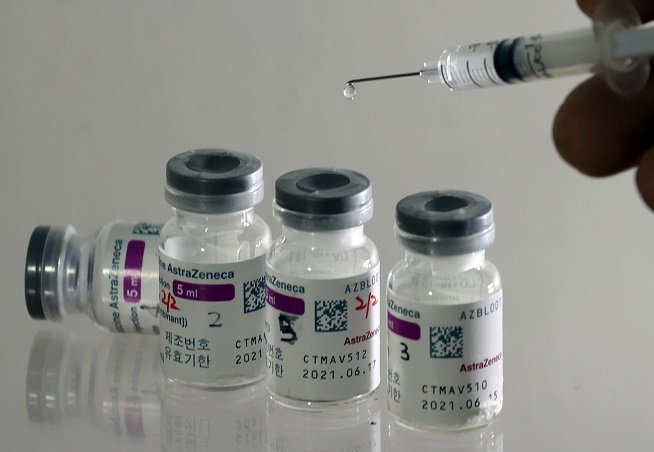 SEOUL, Feb. 23 (Korea Bizwire) — South Korea will begin its first inoculations against the novel coronavirus later this week, health authorities said Tuesday, adding it might not be able to achieve herd immunity by November.

Starting at 9:00 a.m. Friday, health care workers and patients, excluding those aged 65 and older, at nursing homes and other high-risk facilities will receive the first batch of the vaccine developed by AstraZeneca and Oxford University.

A total of 289,271 people, or 93.6 percent of the patients and people working at facilities, including sanatoriums, nursing facilities and rehabilitation facilities, said they will receive the first shot of AstraZeneca’s two full-dose regimen, the KDCA said.

The vaccine is manufactured by SK Bioscience Co., a vaccine unit of South Korea’s SK Group, at a factory in the southeastern city of Andong, the KDCA said.

The vaccine by Pfizer will start being provided to 58,500 health care workers treating COVID-19 patients Saturday.

Pfizer’s vaccine is provided under the World Health Organization’s global vaccine COVAX Facility project, and the shots will first be given at five state-run vaccination facilities as the products require ultra-cold chain storage.

AstraZeneca vaccine is deemed more convenient for mass inoculations as its storage temperature is 2 to 8 C, compared with the vaccine by Pfizer that require ultra-cold chain storage.

Pfizer shots will first be given at five state-run vaccination facilities, the KDCA said. The authorities plan to further build 120 such facilities at general hospitals, gymnasiums and other kinds of government sites. 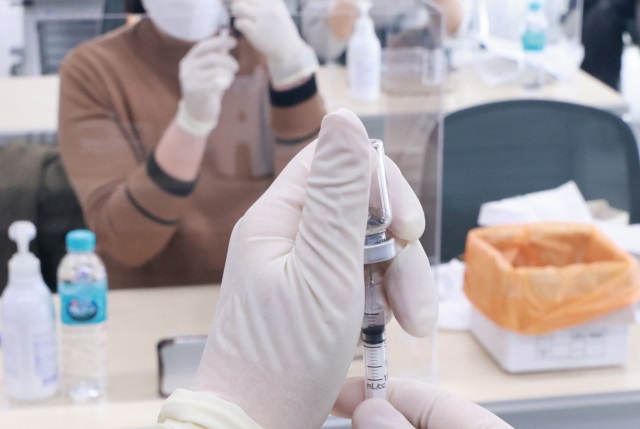 Medical workers learn how to administer coronavirus vaccine shots at a training facility of the Korean Nurses Association in Seoul on Feb. 16, 2021. South Korea has said it will begin its first inoculations against the new coronavirus on Feb. 26 with AstraZeneca’s COVID-19 vaccine. (Yonhap)

Meanwhile, health authorities reaffirmed that it has not yet been decided whether people aged 65 and older will receive Pfizer vaccines.

Earlier in the day, Prime Minister Chung Sye-kyun said chances are high that elderly people here will be given Pfizer-made products that are likely to be shipped additionally between early April and late May.

KCDA Commissioner Jeong Eun-kyeong said the authorities will decide on inoculating the elders depending on the result of clinical trials, and further discussions will be held on whether to provide products by AstraZeneca, Pfizer or Moderna.

South Korea earlier announced it aims to get 70 percent of its population inoculated by September, with herd immunity here predicted to be created by November.

The government has already secured enough COVID-19 vaccines to inoculate 56 million people under the COVAX and separate contracts with four foreign drug firms.

Some health experts, however, showed concern over the goal, saying at least 90 percent of people should be inoculated to achieve the herd immunity.

Also, a recent opinion poll showed that less than half of South Koreans are willing to receive COVID-19 vaccine shots immediately, without waiting for further reports on those vaccines’ effects.

In the survey conducted on 1,020 people aged 18 or over by the Korea Society Opinion Institute, only 45.8 percent said they are willing to be vaccinated “right away” when their turn for COVID-19 vaccine shots comes.

Another 45.7 percent responded that they will delay their vaccinations to “watch the situation” regarding the vaccines’ effects, while 5.1 percent said they will refuse vaccine shots entirely, according to the poll result.

The remaining 3.4 percent said they are not sure.