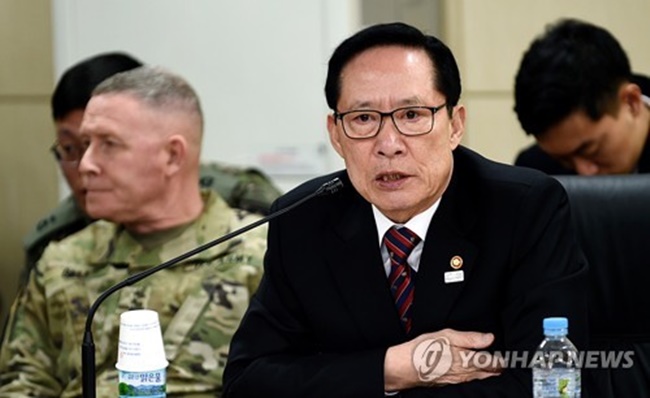 South Korean Defense Minister Song Yong-moo had separate talks with his counterparts, who are visiting to attend the closing ceremony of the PyeongChang Winter Olympics, according to his ministry.

In sitting down with his Swiss counterpart Guy Parmelins, Song expressed his gratitude for the nation’s contribution to peace efforts on the peninsula as a member of the United Nations Command’s Neutral Nations Supervisory Commission.

He requested support for South Korea’s approach toward North Korea.

The Swiss minister assured Song that his government will continue to abide by U.N. Security Council sanctions on Pyongyang for its nuclear and missile programs.

During a meeting with Latvian Defense Minister Raimonds Bergmanis, Song also talked about ways to beef up military and arms industry partnerships between the two sides, according to the ministry.

Song and the ministers agreed that the easing of tensions in Korea through the Olympics and inter-Korean dialogue will be conducive to peace and stability in Northeast Asia, the defense ministry added.