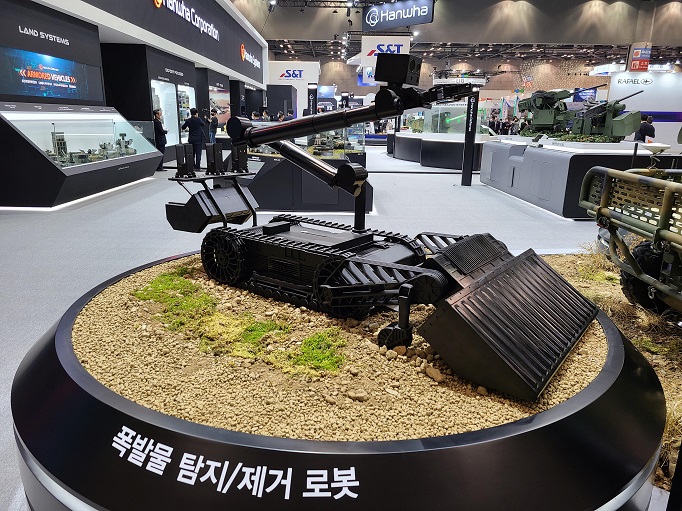 This photo provided by Hanwha Defense on Nov. 24, 2020, shows a robot tasked with detecting and removing explosives.

Under the 18 billion-won (US$16 million) project, Hanwha Defense plans to develop a robot capable of patrolling the mine-strewn Demilitarized Zone (DMZ) on the border with North Korea and other dangerous areas, detecting and eliminating explosives, according to the Defense Acquisition Program Administration (DAPA).

Hanwha has carried out preliminary research since 2017 and secured key technologies, the DAPA said

“Currently, the military uses potable mine detectors and imported robots of this kind. But the detectors could cause damage to troops who operate the gadgets and importing the robots costs a lot,” the procurement agency said.

“The envisioned home-grown robot is expected to prevent loss of human life and raise chances of successfully detecting explosives so as to help boost our defense capabilities,” it added.

The small, track wheel‐type robot will be equipped with advanced, diverse equipment, such as an X-ray fluoroscope, a shotgun and a cable cutting machine, and can be operated remotely, according to Hanwha.

The development is expected to be completed by June 2023 and will be put in operational deployment as early as 2024, according to officials.