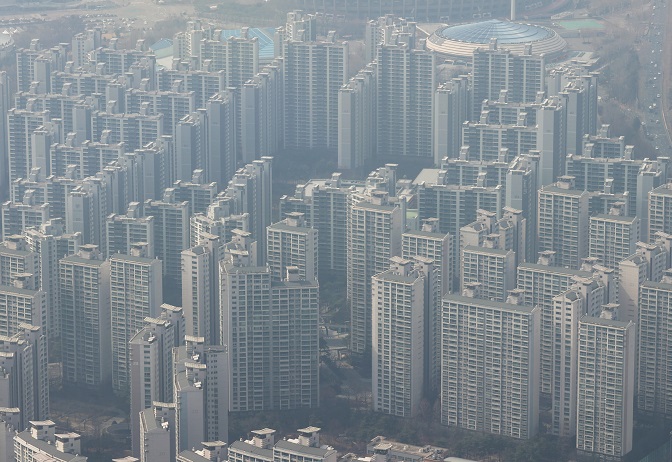 This year, the government plans to have owners of one home pay similar amounts of property-holding taxes to those of last year, according to the land ministry.

To this end, the government plans to apply last year’s state-assessed price values for homes when it sets real estate-related taxes for this year.

In South Korea, the government taxes land and homes based on its annual assessment value instead of the actual market value.

The state-assessed price value for homes is set to further climb this year after it jumped at the fastest pace in 14 years last year in tandem with rising home prices.

Under the measures, multiple home owners will be able to receive eased tax burdens if they sell most of their homes to own only one home by end-May, the ministry said.

The government also plans to allow single-home owners aged 60 and older to postpone the payment of comprehensive real estate taxes until they sell their home or hand it down to their children as inheritance.

Public complaints about the Moon Jae-in administration’s real estate policy mounted as skyrocketing home prices drove up tax burdens on homeowners and raised costs for people who seek to rent or buy homes.

The latest measures came as hikes in the state-evaluated price value will further jack up people’s real estate tax burdens.

The average government-assessed housing prices rose 19.05 percent across the nation last year, the sharpest on-year gain in 14 years, as the country seeks to continue to hike them in a bid to match them close to their market value.

Such prices will likely rise 17.22 percent this year, marking the second straight year of double-digit price growth. In Seoul, the price value will rise 14.22 percent on-year.

The median price of the assessed home price value came to 192 million won (US$158,000) across the nation for this year, with Seoul taking the lead with 443 million won. 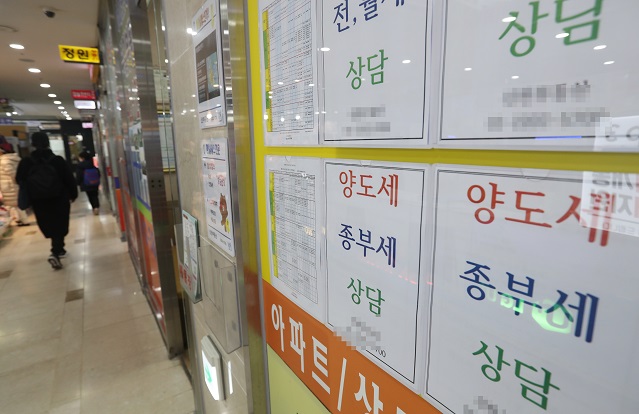 This file photo, taken Dec. 20, 2021, shows information about housing prices put up at a realtor office in southern Seoul. (Yonhap)

The government said last year it plans to raise state-evaluated prices for all types of real estate, including apartments and land, to up to 90 percent of their market prices in the next 10-15 years.

In 2021, the central and provincial governments collected 10.9 trillion won in property-related taxes, more than doubling from 3.93 trillion won in 2016, a year before President Moon Jae-in took office in May 2017, according to a lawmaker from the main opposition party.

The Moon administration has unveiled a set of measures to cool the red-hot real estate market, including tax hikes and tighter lending rules.

But such steps largely have lead to a short-term letup in price gains as excessive demand for homebuying has not easily subsided.

In recent months, South Korea’s housing prices have shown stabilizing movements on the back of increased home supply plans and rising interest rates.

But uncertainty about home prices lingers due to anticipations for eased rules on reconstruction and redevelopment under the incoming new government.

During the election campaign, President-elect Yoon Suk-yeol promised to ease the comprehensive real estate tax for owners of one home and overhaul other property-related taxes.

He also pledged to supply 2.5 million new homes during his term and ease rules on reconstruction and redevelopment.