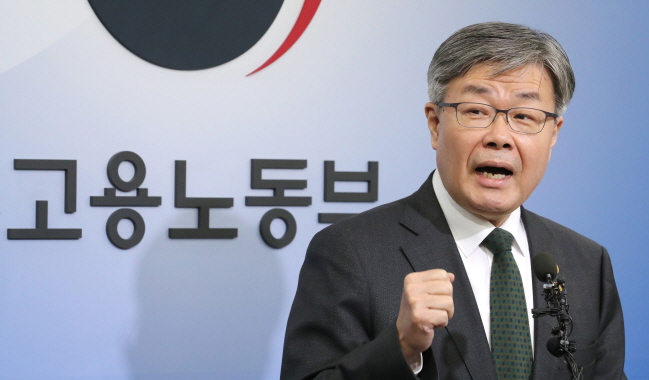 South Korea’s Labor Minister Lee Jae-kap speaks on the government’s plan for extending the grace period for the 52-hour work policy at small firms at a press briefing in the government complex city of Sejong on Nov. 18, 2019. (Yonhap)

“In the case (the policies) are not legislated, the government will push for all possible measures focusing on areas that (companies are) struggling within the extent of not harming the intent of the 52-hour workweek system,” Lee Jae-kap, minister of employment and labor, said at a press briefing in the government complex city of Sejong.

“We will grant a sufficient grace period to companies with 50 to 299 employees so that small and medium-sized enterprises (SMEs) can prepare for the 52-hour workweek policy without issues,” he said.

While Lee did not specify a duration, he explained the grace period is likely “to be a bit more sufficient than the period given to large companies,” hinting that it is expected to be at least nine months.

The announcement comes weeks ahead of the implementation of the workweek scheme.

The plan, devised to cap average working hours at 52 on a weekly basis, was set to expand to companies with 50 to 299 employees in 2020 after it was first introduced for large companies in July last year.

However, SMEs claimed the scheme could add to their financial burden amid an economic slowdown and employee shortage.

The labor minister, meanwhile, also touched on supplementary measures such as allowing companies with special managerial circumstances to exceed the 52-hour cap upon the ministry’s approval.

Also among the proposed measures were increasing foreign worker visa quotas for companies and industries that are struggling from employee shortages.

“The Korean Confederation of Trade Unions (KCTU) is angered by the Moon Jae-in administration’s labor despair policy that has given up the minimum 10,000-won (US$8.60) wage policy as well as the policy on shortening working hours,” KCTU, one of the country’s two largest labor umbrella groups, said in a statement.

A revised bill on labor regulations, including the flexible worktime system, has been pending at the National Assembly for months amid partisan tension.