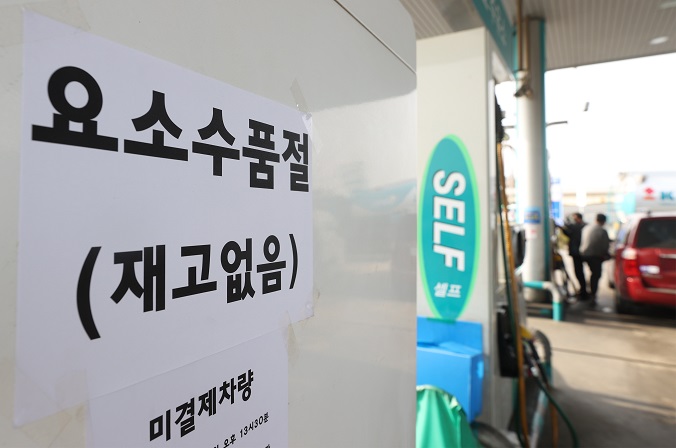 This photo, taken Nov. 15, 2021, shows a sign put up at a gas station in Goyang, just north of Seoul, that reads urea solution has been sold out. (Yonhap)

Three Korean firms have signed contracts to import a combined 1.28 million liters of urea solution from Malaysia, Mexico and Australia, according to the government. South Korea needs 600,000 liters of the solution for diesel cars per day.

A fourth South Korean firm is in talks with a Vietnam firm to import 1,000 tons of urea for industrial uses.

The government said last week it is expected to secure a five-month stockpile of urea solution for vehicles through imports and other means.

South Korea is making a flurry of diplomatic efforts to secure urea and its solution from other countries to avert a potential logistics crisis amid a supply shortage caused by China’s export curbs of urea.

Last month, China tightened export procedures of urea amid a power crisis caused by a coal supply shortage. Coal is the main feedstock to produce urea.

South Korea said 97.6 percent of its urea imports came from China in the first nine months of this year, up from 88 percent in 2020, underscoring its heavy reliance on the resource-rich neighbor for the key material.