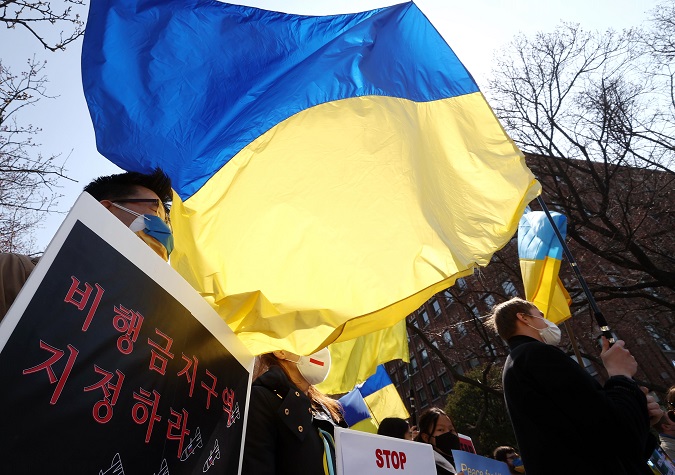 In this file photo, Ukrainians in South Korea hold a rally opposing Russia’s invasion of Ukraine near a Russian embassy in Seoul on March 27, 2022. (Yonhap)

SEOUL, April 4 (Korea Bizwire) — South Korea has decided to issue travel documents for Ukrainians of Korean descent and other locals with families in South Korea, even if they have no passports, a related ministry said Monday.

The measure is meant to support their entry into South Korea from the humanitarian perspective amid the Ukraine-Russia war, according to the Ministry of Foreign Affairs.

It said the government will simplify the entry procedure for Ukrainians without a passport or visa, as the issuance of passports has been suspended since Russia’s invasion of Ukraine.

Earlier this month, South Korea simplified the visa application process for ethnic Koreans in Ukraine, who are called “Koryoin,” and families of Ukrainians staying here. But those without passports have not benefited from the program.