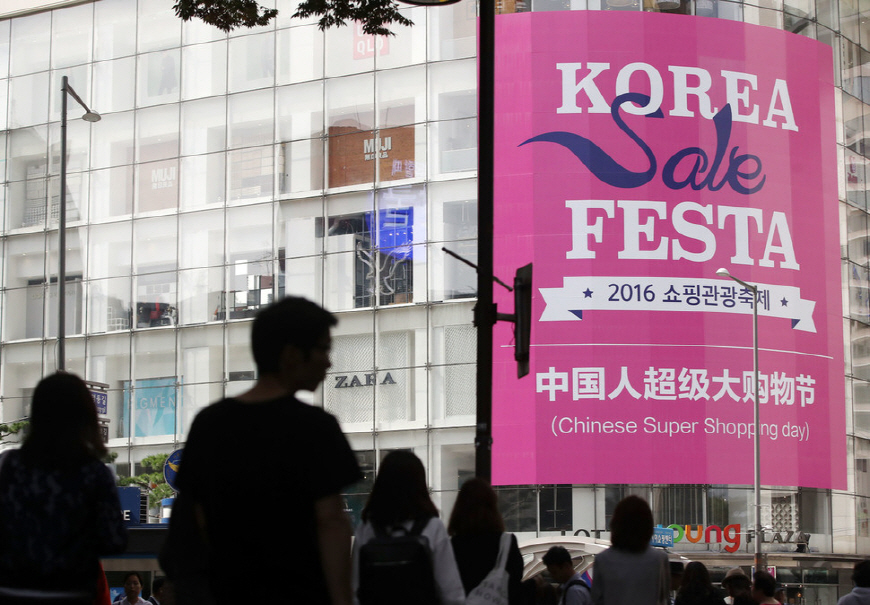 SEOUL, Sept. 20 (Korea Bizwire) — A nationwide shopping festival involving hundreds of retailers and traditional markets will begin next week, the government said Wednesday, as it aims to draw foreign travelers amid a sharp decline in the number of Chinese tourists.

The annual Korea Sale FESTA, jointly organized by the Ministry of Culture, Sports and Tourism and the Ministry of Trade, Industry and Energy, will kick off from Sept. 28 and run through Oct. 31.

During the special bargain sales event, major retailers and manufacturers will offer discounts on various items ranging from electronics and apparel to cosmetics and furniture, the government said.

A series of cultural and entertainment events are also scheduled across the country, with special discount programs on shopping, accommodation and transportation ready for foreign shoppers.

“Recent economic data show a recovery in exports, but sales at department stores and discount outlets have decreased,” Trade Minister Paik Un-gyu said. during a meeting with local retailers. “Under the current circumstances, I hope Korea Sale FESTA will revitalize consumption and the local economy by drawing shoppers at home and abroad.”

The upcoming festival is the third of its kind since the government initiated a shopping festival in 2015 as part of an effort to prop up the national economy which was then hit hard by a Middle East Respiratory Syndrome (MERS) outbreak.

This year’s event is being held as the country’s retail industry is struggling from a drop in the number of Chinese tourists after Beijing banned its tour agencies from selling package tours bound to South Korea in apparent retaliation over Seoul’s deployment of a U.S. anti-missile system.

Despite repeated assurances from Seoul and Washington that the U.S. Terminal High Altitude Area Defense (THAAD) system is designed only to defend against North Korea, China has long voiced opposition to the deployment, arguing that it poses a threat to its own security interests.

The number of Chinese visitors plunged nearly 70 percent in July, marking the fifth straight month of decline. Chinese nationals accounted for nearly half of some 17 million foreigners who visited the country last year.

5 thoughts on “S. Korea to Kick Off Nationwide Shopping Festival Next Week”