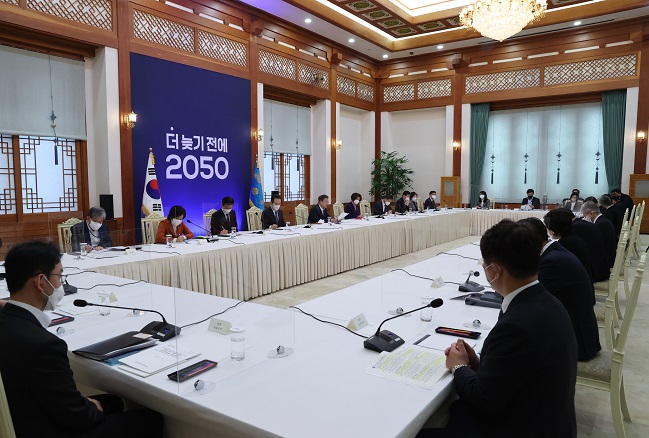 An interagency meeting on South Korea’s carbon-neutral campaign is under way at Cheong Wa Dae in Seoul on Nov. 27, 2020. (Yonhap)

SEOUL, Nov. 27 (Korea Bizwire) — President Moon Jae-in announced a plan Friday to establish a presidential body on South Korea’s stated goal of going carbon neutral by 2050 as part of a “strong pan-governmental system” to push for the vision.

He said the envisioned government-private organization, tentatively named the “2050 Carbon Neutrality Committee,” is meant to implement the policy speedily.

The government will also seek to create a new vice ministerial position to be in charge of energy policy at the Ministry of Trade, Industry and Energy, the president added.

He was speaking at an interagency meeting on drawing up carbon-neutral strategies, joined by the heads of relevant ministries and senior ruling Democratic Party officials.

“The grand transition to a carbon-neutral society will be an opportunity to simultaneously pursue economic growth and the improvement of quality of life,” he said in his opening remarks.

He added, “(The government) is going to push for low carbonization in all economic sectors. The structural transformation of the energy system is the starting point.”

Moon revealed a scheme to place a focus on developing three key new industries — renewable energy, hydrogen and energy IT — in order to accelerate the transformation of South Korea, one of the world’s most fossil fuel-reliant economies, into a carbon-neural nation.

In particular, he said his administration will grow future car production businesses as a leading industry, pledging to lay a “firm foundation” for moving toward carbon neutrality before his tenure ends in May 2022.

Moon also said his government will consider introducing a related fiscal system, which includes the creation of a special fund to help cope with climate change, as it’s preparing to submit a long-term low-carbon growth strategy to the United Nations within this year.

He then stressed the need for international cooperation.

South Korea will push actively for joint projects with the European Union to achieve carbon neutrality and solidify policy coordination with the new U.S. administration of Joe Biden, while strengthening trilateral partnerships with China and Japan, according to the president.