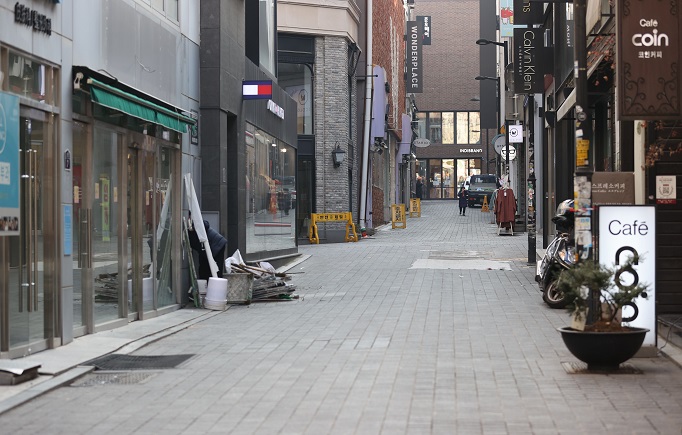 A street in central Seoul is nearly empty on Dec. 28, 2020, amid South Korea’s strengthened social distancing campaign due to the resurgence of COVID-19 cases. (Yonhap)

The third emergency relief handout is anticipated to lend a hand to 5.8 million people whose livelihoods have been affected by the COVID-19 pandemic, according to the Ministry of Economy and Finance.

Of the amount, 5.6 trillion won will be directly provided to small business owners, taxi drivers, and freelancers and temporary workers.

The government intends to approve the plan during a Cabinet meeting next week and start offering the funds to recipients starting on Jan. 11.

“As custom measures to help out small business owners and those disenfranchised in terms of labor, we will swiftly execute the handouts from early January, as time is of the essence,” Moon said during the last weekly Cabinet meeting of the year at Cheong Wa Dae.

The president also stated that “the war against the coronavirus wasn’t over” and asked the public service community to work much harder to overcome the national crisis with an extraordinary sense of resolve.

The move came as shop owners have been facing the growing burdens of paying rental fees due to the government’s order to shut down their business amid the protracted pandemic, despite the previous two rounds of relief packages.

Shop owners will receive handouts of up to 3 million won depending on the nature of their businesses.

Owners of facilities whose operations are suspended under the country’s social distancing guidelines will receive the highest amount.

Businesses that are allowed to operate but with some limits will receive 2 million won. Others will be provided with 1 million won.

Freelancers whose income decreased amid the pandemic will also be eligible to receive up to 1 million won as well, according to the finance ministry.

Under the Level 2.5 social distancing plan, restaurants are only allowed to have sit-in customers before 9:00 p.m., while cafes can only offer take-out around the clock.

The so-called risk prone facilities, which covers cram schools, karaoke centers, clubs and gyms, have been forced to shut down in the capital area since early December under the guideline that will run through Sunday.