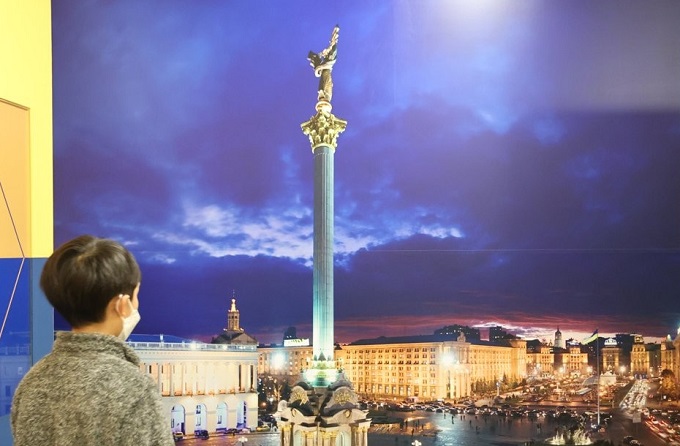 A visitor looks at displays at a special exhibition, titled “Ukraine History via Its Currencies,” at the Bank of Korea’s Money Museum in Seoul on Jan. 25, 2022. The photo features the Independence Square in Kiev. (Yonhap)

SEOUL, Nov. 29 (Korea Bizwire) — South Korea said Tuesday it plans to contribute US$3 million worth of humanitarian aid for a World Food Programme scheme to provide Ukrainian grain to countries vulnerable to famine and drought.

It has decided to join the “Grain from Ukraine” initiative that aims to allocate parts of Ukrainian grain exported through the Black Sea to food-stricken countries, including Ethiopia, Somalia, Sudan and Yemen, according to the Ministry of Foreign Affairs.

“The Korean government’s support for the ‘Grain from Ukraine’ initiative is regarded as a meaningful contribution as a global pivotal state to the efforts of the international community to help relieve the global food crises,” the ministry said in a press release.

At a Group of 20 meeting earlier this month, Ukrainian President Volodymyr Zelenskyy urged participation from the international community as he first presented the new scheme.