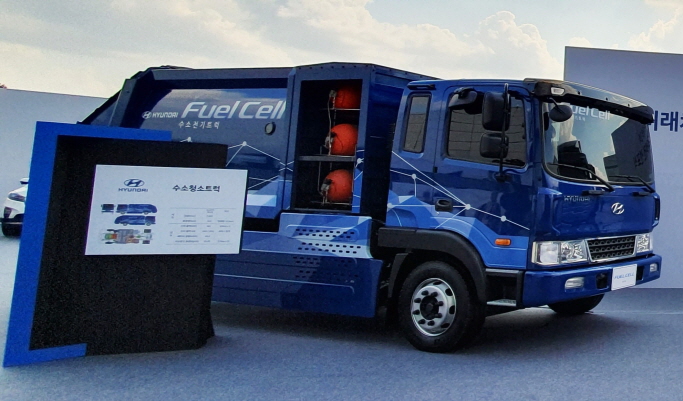 A hydroelectric fuel cell garbage car, for export, is unveiled during a ceremony to declare a national vision for future cars at the carmaker’s Namyang R&D Center in Hwaseong, Gyeonggi Province, on Oct. 15, 2019. (Yonhap)

SEJONG/SEOUL, May 14 (Korea Bizwire) — South Korea said Thursday it will carry out a test run of hydrogen fuel-cell electric commercial vehicles as it moves to promote the resource as one of the main energy sources for Asia’s fourth-biggest economy.

The government has signed two separate memoranda of understanding with Hyundai Motor Co. and other hydrogen-related companies to test the durability of hydrogen fuel-cell electric trucks and taxies in pilot projects, according to the Ministry of Trade, Industry and Energy.

Under the MOU signed with the trade ministry and the Korea Automotive Technology Institute (KATECH), Hyundai will test a 5-ton hydrogen-powered garbage truck in Changwon, 400 kilometers south of Seoul, the company said in a statement.

The pilot program is scheduled to run through 2021 before being expanded to other regions.

Hyundai also plans to establish a hydrogen charging station for large hydrogen vehicles in Changwon city this year. The 5-ton hydrogen truck can travel up to 599 kilometers at speeds of 60 kph on a single charge, it said.

The carmaker aims to gradually replace commercial vehicles in the public sector with hydrogen ones.

In the other MOU signed with the ministry, KATECH and two Seoul-based taxi companies, Hyundai said it will provide 10 Nexo hydrogen cars to the taxi companies for durability tests.

Hyundai already put 10 Nexo cars through durability tests in September when a hydrogen charging station opened at the National Assembly in Seoul.

Hyundai Motor Group, which aims to morph into a future mobility solutions provider, announced in December 2018 that it will invest 7.6 trillion won (US$6.7 billion) in hydrogen car-producing facilities and related R&D activities by 2030.

Under the plan, the group plans to establish two separate plants to churn out 500,000 hydrogen vehicles in 2030. A hydrogen car is considered to be environmentally friendly since it emits only water vapor as it generates electricity.

South Korea has been seeking to build a society that harnesses hydrogen as the main source of energy for vehicles and other daily uses. The policy is considered one of the key projects pushed by the Moon Jae-in administration.

“The COVID-19 pandemic has sparked the world’s awareness over health and safety. Demand for environment-friendly hydrogen fuel cell cars will grow down the road,” Industry Minister Sung Yun-mo said during a meeting with officials from KATECH and Hyundai Motor.

It can be produced by processing liquefied natural gas or as a by-product of industrial facilities, including petrochemical plants.

The accumulated sales of hydrogen fuel cell cars in South Korea reached 5,083 in 2019, jumping from only 87 in 2016, according to the ministry. Outbound shipments of the models reached 788 units last year.

The country, which had just nine charging stations for hydrogen-powered cars in 2016, finished installations of 34 stations last year. It plans to add at least dozens more in 2020 to have 310 units by end-2022.