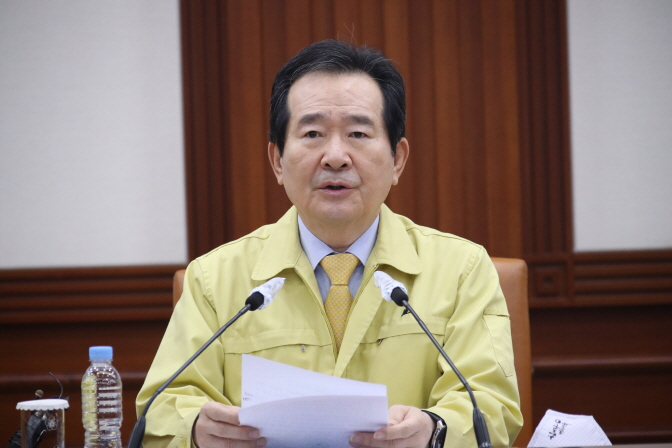 South Korean Prime Minister Chung Sye-kyun speaks at a meeting of the Central Disaster and Safety Countermeasures Headquarters in Seoul on April 11, 2020. (Yonhap)

SEOUL, April 11 (Korea Bizwire) — South Korea said Saturday it will use electronic wristbands on people who violate self-isolation rules to better contain the spread of the novel coronavirus.

Prime Minister Chung Sye-kyun said the country will make self-isolation violators wear electronic wristbands since the number of cases of people breaching the self-quarantine in recent weeks has raised concerns.

“After deep consideration, the government has decided to put electronic wristbands on people who violate self-isolation rules, such as going outside without notice and not answering phone calls,” Chung said during a meeting of the Central Disaster and Safety Countermeasures Headquarters in Seoul.

“We have listened to quarantine experts and gathered opinions from various communities.”

Health authorities said they plan to start using the wristbands within two weeks but will ask the violators’ permission before actually strapping such a device to their wrist since there is no legal ground to force people to wear it.

If people under self-isolation break quarantine rules, such as going outside without notice and not responding to health check calls, they will face legal actions and will be asked to wear the wristbands for the rest of their quarantine period, according to the KCDC.

Health authorities said they have already finished testing of the wristbands and can produce 4,000 of them a day.

The device, which the KCDC likes to call a “safe band,” will interconnect with the government’s mobile application for self-isolators. If a person damages the device, it will automatically send a notification to health authorities.

In a recent survey of 1,000 adults nationwide, commissioned by the Ministry of Culture, Sports and Tourism, 80.2 percent of people supported the idea of using electronic wristbands to keep track of those under self-quarantine.

However, some have pointed out that such a measure can be subject to potential human rights violations.

The wristbands would track self-isolators’ movements via their mobile phones. The government currently runs a mobile app to monitor people in self-quarantine.

As of Thursday, more than 54,000 people were under self-quarantine. So far, more than 160 people have been caught violating self-isolation rules.