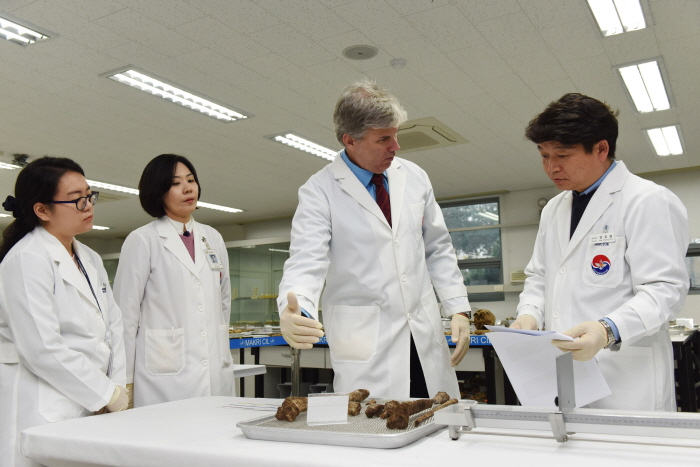 The project this time involves some 10 South Korean officials and five experts from the U.S. Defense POW and MIA Accounting Agency. (image: Ministry of National Defense)

SEOUL, May 7 (Korea Bizwire) — Forensic experts from South Korea and the United States began joint identification work on Tuesday for remains believed to be from soldiers killed in the 1950-53 Korean War, the defense ministry said Tuesday.

The two sides plan to work together for the next four days to analyze remains that have been discovered during excavation works over the past several years at major former battle sites, including Paju, Gyeonggi Province, north of Seoul, according to the ministry.

Though the exact number of remains that will go through the identification process is not known, they include three sets of remains believed to be from service persons from European nations, the ministry noted.

The project this time involves some 10 South Korean officials and five experts from the U.S. Defense POW and MIA Accounting Agency.

Since 2007, South Korea and the U.S. have conducted such joint projects aimed at determining the identities of war remains two to four times per year. Last year, they confirmed the identities of 65 Korean and two U.S. soldiers killed during the war, and repatriated them to their families.

“The two sides will further strengthen cooperation in analyzing war remains, including 90 pieces of bones and 12,000 items believed to belong to the Korean War dead South Korea has recently found,” the ministry said.

Since last month, the South Korean military has carried out a demining and excavation project on Arrowhead Ridge, a former battle site inside the DMZ that separates the two Koreas, and found a total of 92 pieces of bones.

The operation was supposed to be a joint project with North Korea, under the inter-Korean military accord signed September last year, but Pyongyang has not responded to its implementation, leaving Seoul to carry out the operation alone.