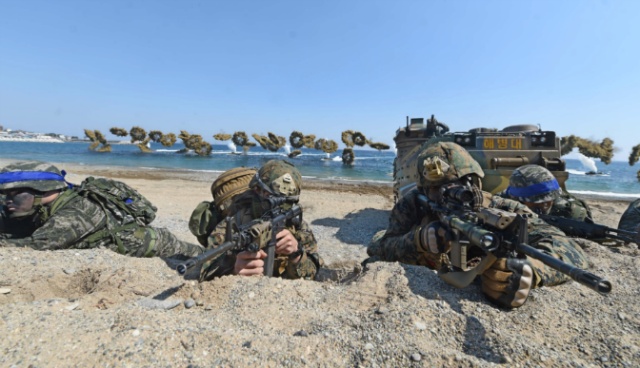 Some observers said that the allies could delay the two major exercises depending on the outcome of the Trump-Kim meeting. (image: Defense Media Agency)

SEOUL, Feb. 8 (Korea Bizwire) — South Korea and the United States have postponed the announcement of plans for their combined springtime military exercises until after the second summit between Washington and Pyongyang slated for late this month, a government source said Friday.

If the allies press ahead with their annual training programs, ongoing preparations for the summit between U.S. President Donald Trump and North Korean leader Kim Jong-un may be affected.

There’s also a possibility that the leaders will reach a deal to cancel or postpone the drills in the meeting scheduled to take place in Vietnam from Feb. 27-28.

“The exercise plans for the first half of this year are set to be announced after the North-U.S. summit,” the source told Yonhap News Agency on condition of anonymity. “But the tentative plan to begin a theater-level command post exercise on March 4 remains unchanged.”

Seoul and Washington have made plans to stage the two-week Key Resolve command post exercise and the Foal Eagle field training between March and April. They have provisionally agreed to rename them in consideration of the North’s aversion to them.

In line with their pledges to buttress ongoing diplomacy for peace, the allies’ militaries have been seeking to avoid provoking Pyongyang with their major exercises, which it has denounced as a “rehearsal for invasion.”

They have reportedly renamed the Key Resolve exercise “19-1 Exercise,” while considering creating a new name for the Foal Eagle and downsizing it to battalion-level maneuvers to be conducted throughout the year.

Some observers said that the allies could delay the two major exercises depending on the outcome of the Trump-Kim meeting.

The summit will focus on fleshing out the North’s concrete steps for the “complete denuclearization” of the peninsula that Trump and Kim agreed to in their first encounter in Singapore last June, and what the U.S. can offer in exchange for them.