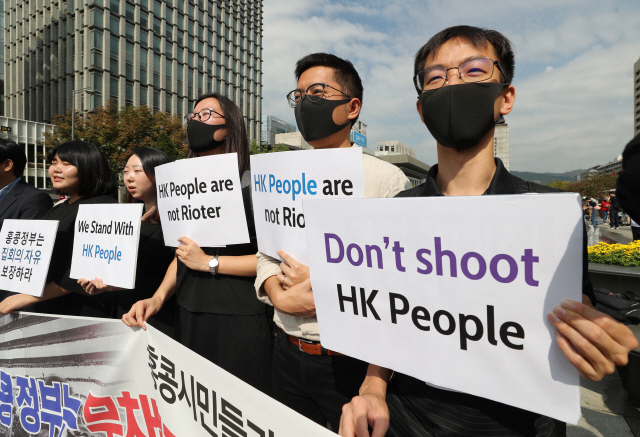 Civic groups and Hong Kongers living in South Korea hold a press conference on Oct. 4, 2019, in support of ongoing democracy demonstrations in the city. (Yonhap)

SEOUL, July 3 (Korea Bizwire) – South Korea’s major conglomerates operate a combined 170 subsidiaries in Hong Kong that has emerged as a bone of contention between the United States and China over a controversial security law in the financial hub, data showed Friday.

The tally covers wholly owned subsidiaries of South Korea’s 64 business groups with assets of 5 trillion won (US$4.2 billion) or more.

Most of their Hong Kong units engage in investment management, financial services or other special purposes instead of manufacturing and marketing.

Thirty-eight conglomerates own one or more units in Hong Kong, with No. 3 conglomerate SK Group having the largest number at 44. Lotte came next with 18, followed by CJ with 17 and top business group Samsung with 13.

Observers said the U.S.-China showdown over Hong Kong’s security law could have negative repercussions on South Korean conglomerates’ future operations of their units there.

In particular, the U.S. move to eliminate Hong Kong’s special status could come as a new variable for financial behemoth Mirae Asset Group that has picked Hong Kong as a springboard for expanding its overseas business.

“It remains to be seen what short-term impact the U.S.-China row will have on South Korean conglomerates’ business operations in Hong Kong,” said O Il-sun, head of the institute.

“But there is a possibility of their moving Hong Kong units to other countries if the diplomatic spat intensifies down the road.”

Earlier this week, China’s parliament passed a law outlawing acts of subversion, secession, terrorism and colluding with foreign forces in Hong Kong, sparking a groundswell of criticism from Western countries.

Washington is pressing ahead with tough new sanctions on Chinese officials and companies, especially banks, in retaliation against the security law.