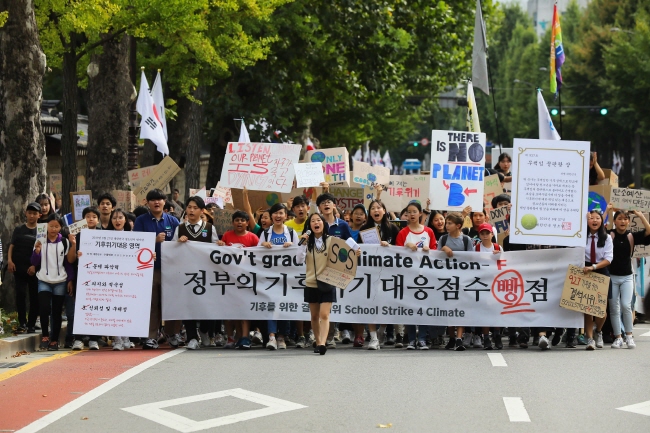 This image provided by the Youth 4 Climate Action shows students marching to the presidential office as part of the youth climate strike on Sept. 27, 2019.

Greenpeace asked 100 subsidiaries of 10 major conglomerates in the country about their usage of renewable energy and plans on fully replacing electricity with renewable energy to come up with an overall score.

Only 44 subsidiaries responded to the survey, and only 25 had specific plans to expand the use of renewable energy.

Respondents included all subsidiaries from SK Group and Samsung Group, which claimed to have plans for a full introduction of renewable energy.

However, they received a score of C+ due to several companies that failed to set a target year or fall behind schedule.

Subsidiaries from other conglomerates including Lotte Group and Hanwha Group either failed to join the survey or refrained from responding due to security reasons, receiving a score of F.

Greenpeace reported that 317 foreign companies are currently members of RE100 campaign, a global initiative for businesses to use 100 percent renewable electricity by 2050, as of June 2021.

In contrast, only eight South Korean companies are RE100 members.