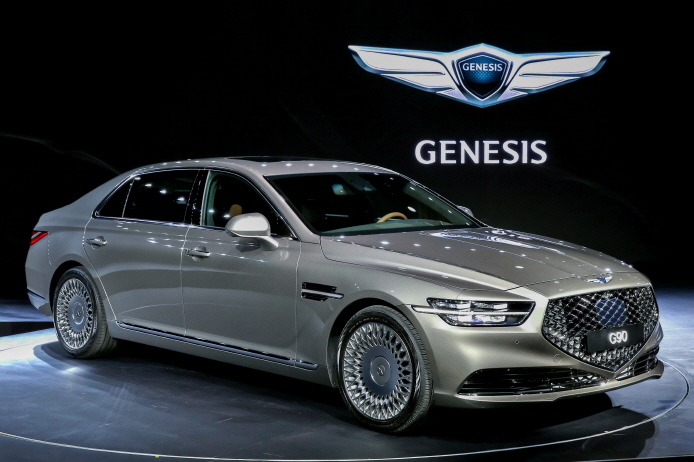 According to the findings by the Korea Automobile Manufacturers Association (KAMA), sales of the Genesis G90 and Kia K9 flagship sedans reached 1,955 units in November, up 78.1 percent from a year ago. Numbers shot up to 3,221 units for a gain of 235.5 percent on-year in December, with corresponding figures reaching 2,434 and 1,866 vehicles in the first two months of the year, respectively.

The sales number for January and February are an increase of 128.3 percent and 111.6 percent, respectively, from a year earlier.

KAMA said the uber luxury G90, the top of the line model for Genesis, Hyundai Motor Co.’s luxury brand, reached 3,000 units on the first day of preorders, with total sales of the full-size vehicle already exceeding the 5,000 unit mark.

The K9, also referred to as the K900 in foreign markets like the United States, sold an average of more than 1,000 vehicles from April of last year to January.

The association said solid sales come as consumers are drawn to new models and import carmakers, such as Mercedes-Benz and BMW, suffered from supply problems.

“To some degree supply shortages by foreign brands caused local car buyers to opt for new domestic offerings by Genesis and Kia,” a source at the automobile association said.

Reflecting this, sales of cars made by the two German luxury carmakers all declined from November 2018 through last month.

The industry insider added that carmakers are paying more attention to luxury models because they cannot be easily usurped by SUVs that are in a totally different segment and are in high demand at present.

The percentage of luxury car sales that stood at just 1.9 percent of the total in 2017, rose to 3.1 percent last year and stood at 4.6 percent as of February this year.

“Taking into account the importance of flagship models, the recent increase is a positive development,” a representative for a local carmaker said.

He added that with the release of the all-new Genesis G80 expected in the second half of the year and the launch of the BMW’s new 3 series coming at around the same time, competition for the domestic luxury carmaker is expected to heat up in the coming months.