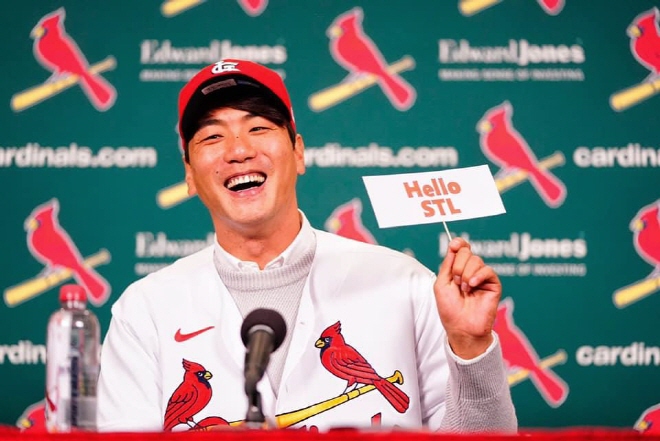 SEOUL, Dec. 18 (Korea Bizwire) — South Korean left-hander Kim Kwang-hyun has signed with the St. Louis Cardinals, fulfilling his dream of pitching in the majors in his second crack.

The Cardinals announced on Tuesday (local time) their signing of the 31-year-old pitcher and introduced him right away at a press conference at Busch Stadium in St. Louis. The deal is reportedly worth US$8 million for two years.

He was tied for second in the league in wins, second in strikeouts and third in ERA.

In just his second season back from Tommy John surgery to repair elbow ligament damage, Kim tossed the second most innings of his career in 2019.

In fielding independent pitching (FIP), an ERA-like metric that accounts for only the outcomes that pitchers have control over, such as strikeouts, home runs and walks, Kim ranked fourth among KBO starters with 3.01.

Kim allowed the second-highest batting average on balls in play (BABIP) with .338, which suggests he was unlucky when it came to how the batted balls bounced.

Kim was posted for Major League Baseball (MLB) clubs on Dec. 5, and any interested team had until 5 p.m. Eastern Time on Jan. 5 to sign the left-hander. 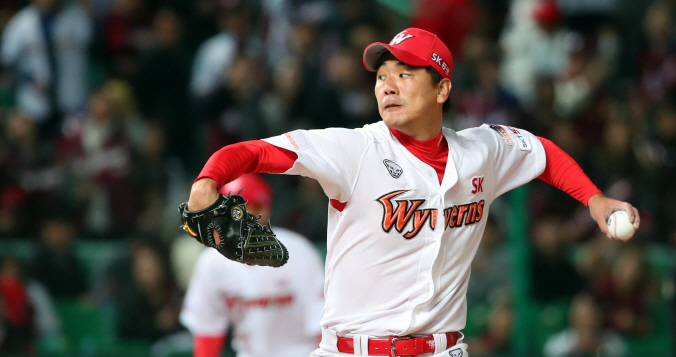 Kim Kwang-hyun of the SK Wyverns pitches against the Kiwoom Heroes during a Korea Baseball Organization postseason game at SK Happy Dream Park in Incheon, 40 kilometers west of Seoul on Oct. 14, 2019. (Yonhap)

This was the second time Kim had been posted. After the 2014 season, under a different posting system, the San Diego Padres emerged as the winner of a silent auction for the exclusive negotiating rights to the posted player.

The two sides couldn’t come to an agreement within their 30-day window, forcing Kim to return to the KBO.

Kim, viewed as a middle-of-the-rotation starter, becomes the lone left-hander in the Cardinals’ rotation as it’s currently projected, though the team could add another pitcher before the new season.

The Wyverns will receive a “release fee,” or a transfer fee, in return for allowing Kim to leave via posting.

Under the current posting rules, if the guaranteed value of the posted player’s deal is $25 million or less, then the release fee will be 20 percent of the contract.