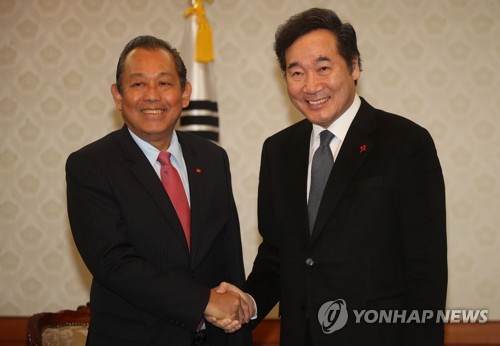 Lee met with Vietnam’s Permanent Deputy Prime Minister Truong Hoa Binh in Seoul. Lee said he is satisfied with how South Korea and Vietnam have developed ties over the last five years and it was meaningful for Binh to visit Seoul this year, which marks the countries’ 25th anniversary of diplomatic relations.

“In order to further develop the relationship between South Korea and Vietnam, I think grassroots exchanges and leaders’ trust-building efforts are very important,” Lee said. “I expect that agreements from the Korea-Vietnam summit on Nov. 11, including expanding the two countries’ annual bilateral trade to over US$100 billion by 2020 and strengthening cooperation in the infrastructure sector, to be carried out firmly.”

South Korean President Moon Jae-in and Vietnamese President Tran Dai Quang met on the sidelines of the Asia-Pacific Economic Cooperation (APEC) summit in Danang, Vietnam, where they agreed to increase trade and exchanges.

Binh, who arrived in South Korea on Saturday, said he agrees with Lee’s view on the two countries’ relationship, and Vietnam wants to expand cooperation in various areas including culture, education and tourism.