LG Chem Ltd. and Samsung SDI Co. have been moving in different directions as the worldwide market for high-capacity batteries has grown, observers here said.

Data showed that LG Chem is moving to expand its standing in the electric vehicle (EV) sector, while Samsung SDI has concentrated on smaller units best suited for consumer electronics and wearables.

“LG Chem did well in EVs with its sales in this field alone topping 1 trillion won (US$893.6 million) in the fourth quarter of last year, with the company posting a profit, making it the first company to do so,” a industry watcher said.

He pointed out EV batteries made up half of the company’s total annual sales last year, reflecting its growing importance to LG Chem. That contrasts with Samsung SDI, which acknowledged that it does expect to post a profit in EV-related batteries in the near future.

The company said that combined sales of batteries for electrified cars and energy storage system stood at around 700 billion won in the last three months of 2018, way shy of numbers for LG Chem.

SNE Research said that, in 2018, LG Chem had a global market share of 10.2 percent in the area of EV batteries, placing it fourth, while market share by Samsung SDI stood at 5.5 percent, putting it in fifth place.

Son Young-joo, an analyst at Kyobo Securities, said LG Chem’s turning a profit in the last quarter may lead to a sharp rise in sales going forward, that can enhance the company’s status in the global arena. 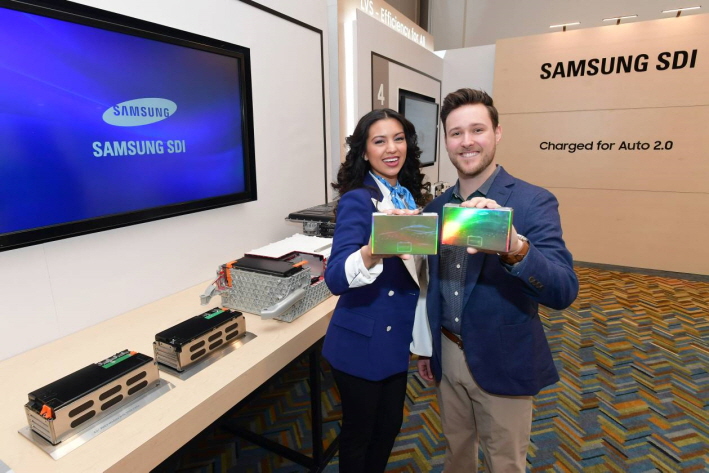 Observers, however, said that while Samsung SDI lagged behind its domestic rival in the EV business, it was the winner in terms of batteries used in information technology (IT) products.

“Samsung SDI sales in IT products are estimated to have reached 1.1 trillion won in the fourth quarter of 2018,” said Chang Jung-hoon, a market expert at Samsung Securities Co.

He said that the total accounts for 60 percent of Samsung SDI’s sales in the three-month period. IT batteries made up 40 percent of LG Chem’s business.

They said LG Chem was early to the EV battery market, allowing it to gain an edge over others, while Samsung SDI concentrated on high-capacity products that placed it in a good position to solidify its position in the IT field.

Both companies are making large investments so they can hold onto and raise their standings in the industry that is forecast to post double-digit growth this year.

LG Chem said it will invest 3.1 trillion won in its battery business this year. Samsung SDI is moving to open a second IT battery production plant in China this year. The company said it will inject resources to increase production of batteries for smart watches and other types of wearable products.

The company, moreover, said it will inject 600 billion won to expand its operations in the United States.

According to B3, a market research firm, the global EV battery market may surge 58 percent on-year in 2019, with corresponding numbers for small IT powering batteries to move up 17 percent.