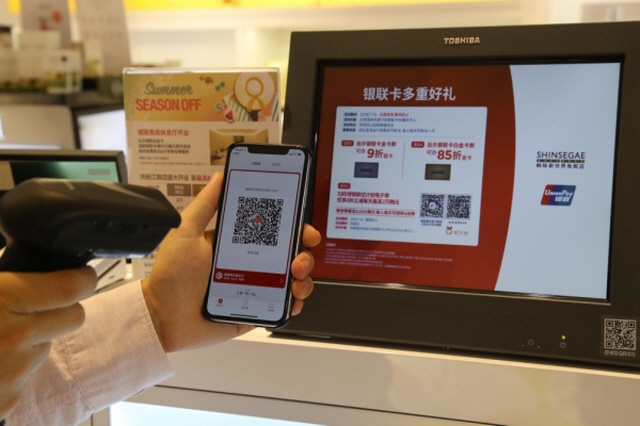 A model showcases how to use the UnionPay QR code payment system. (image: Shinsegae DF Inc.)

Shinsegae DF Inc. said it has adopted UnionPay’s QR code payment system for all of its outlets. It also opened a premium lounge for UnionPay VIP users at its Gangnam branch, providing various services, including luggage keeping.

Shinsegae said transactions made by UnionPay in the April-August period increased 52 percent compared with the same period a year earlier. It did not provide the value of the credit card spending.

“We will adopt payment systems to meet various needs from our Chinese customers and take a leading role in making a better tour environment for them,” a Shinsegae official said.

BGF Retail said the number of payments made on Chinese mobile payment platforms jumped eightfold in the January-August period compared with the same period a year earlier.

China banned the sale of travel packages to South Korea in March 2017 due to a diplomatic row with Seoul over the deployment of an advanced U.S. anti-missile system in South Korea.