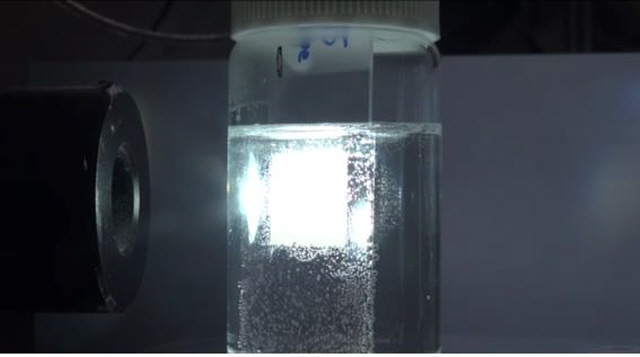 Hydrogen is being created from water in a lab using light from a solar simulator and a single-atom heterogeneous catalyst. (image: Institute for Basic Science)

SEOUL, Apr. 23 (Korea Bizwire) — South Korean scientists on Tuesday said they have developed an efficient and affordable way to make hydrogen, opening new potential for the production of the clean energy resource.

The researchers led by Hyeon Taeghwan, director of the Center for Nanoparticle Research at the Institute for Basic Science, and Seoul National University (SNU) professor Nam Ki-tae said they have, for the first time ever, successfully created a single atom heterogeneous catalysis that mimics enzymes used by the human body to convert water into hydrogen using regular light.

The process using copper and titanium dioxide as catalyst material has been published in the latest issue of Nature Materials under the title “Reversible and cooperative photoactivation of single atom copper-titanium dioxide photocatalysts.”

“The newly created platform technology utilizes copper atoms placed over nano titanium dioxide particles to create a catalyst that acts like an enzyme in creating hydrogen under normal atmospheric pressure and at room temperature,” said Hyeon, who is also a distinguished professor at SNU.

Experiments showed a gram of the material used in the catalyst can create 30 milligrams of hydrogen per hour under good lighting.

Hydrogen is expensive to make despite accounting for the bulk of the mass in the known universe. If it can be made economically, the resource can solve many of the world’s energy needs. The global market size for hydrogen was estimated at over US$115 billion in 2017.

Hyeon said that at present, most hydrogen is made through a methane reformation technique that is criticized for being energy-intensive, uses fossil fuel and releases greenhouse gases into the air.

The latest findings show the new method can harness more than 40 percent of the light used into a hydrogen transformation reaction, which is on par with the efficiency level of catalysts that use extremely expensive platinum.

The platinum-titanium dioxide method is regarded as the most efficient way to retrieve hydrogen from water using light.

It said with more work, the technology can be further developed down the road for industrial level production although such a process could take time.