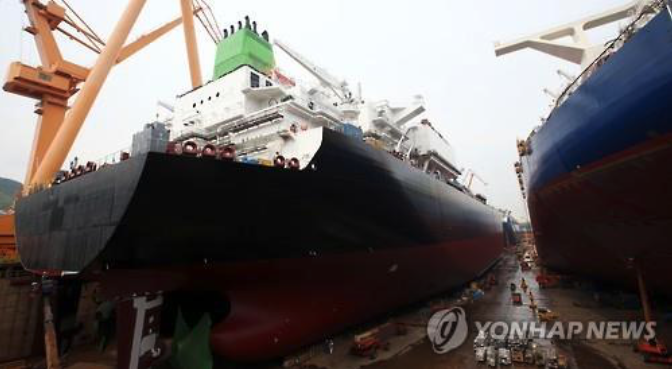 The Big Three shipyards racked up a combined net loss of 7.7 trillion won last year. It was the first time that all three of the nation’s largest industry players registered losses. (image: Yonhap)

Daewoo Shipbuilding’s overseas businesses posted 2.18 trillion won in debt, up 43.2 percent over the five-year period, while Samsung Heavy saw the figure nearly triple to 1.26 trillion won. Debts of Hyundai Heavy subsidiaries, on the other hand, fell 13.4 percent to 1.91 trillion won.

The debt ratio of Hyundai Heavy’s Vietnam unit soared to 6,250 percent last year, while the Nigerian unit of Samsung Heavy registered a debt ratio of a staggering 3,234.3 percent.

Loss-making South Korean shipyards are undergoing creditor-led debt-restructuring with rising pressure from the government. They are ratcheting up moves to reduce their workforces and sell noncore assets in order to lower costs.

The shipbuilding industry, once regarded as the backbone of the country’s economic growth and job creation, has been reeling from mounting losses caused by an industrywide slump and increased costs.

The Big Three shipyards racked up a combined net loss of 7.7 trillion won last year. It was the first time that all three of the nation’s largest industry players registered losses.