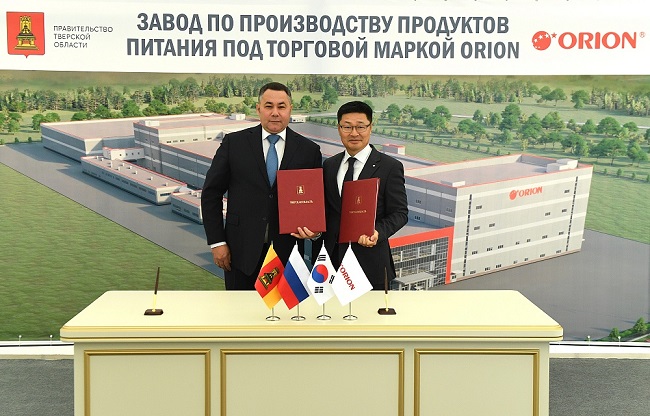 SEOUL, Sept. 10 (Korea Bizwire) — Orion Corp., a major South Korean confectionery company, said Thursday it will build a new factory in Russia to meet growing demand for its products in the Russian and Central Asian markets.

The new production facility will be built in the Tver Region in western Russia at a cost of some 80 billion won (US$67.5 million), the company said.

Ground was already broken for the envisioned plant in July for completion by 2022, and an investment deal was signed with the government of the Tver Region on Wednesday, Orion added.

When complete, the factory with eight production lines will be four times larger than the one already operating in the area and will produce up to 150 billion won worth of snacks annually, in particular more than 1 billion pieces of its bestselling product Choco Pie, a chocolate-covered marshmallow snack.

“Orion’s two plants in Russia are running almost at full tilt thanks to sharply rising sales in the country,” a company official said. “The new plant will help Orion tap deeper into Russia and Central Asian countries.”

Orion first entered Russia in 1993 with exports of Choco Pie. The firm’s first factory in the Eurasian country was built in the Tver Region in 2006, followed by another plant in the Siberian city of Novosibirsk in 2008.

Its flagship Choco Pie and other snacks have been selling like hot cakes in Russia, with sales and operating profit soaring 26.5 percent and 105.4 percent on-year in the first half of 2020, respectively.