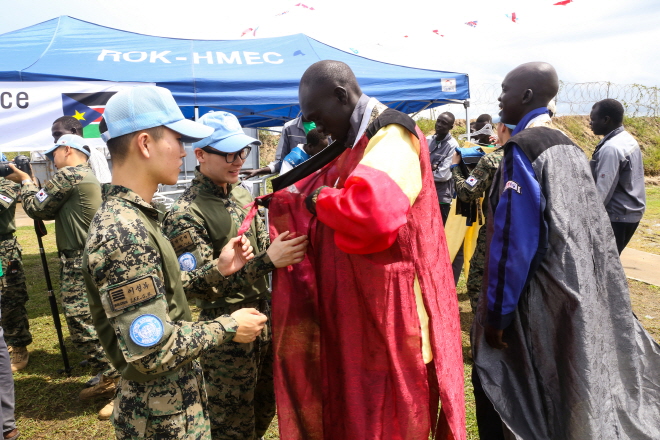 This year’s Chuseok, the Korean autumn harvest celebration and one of the biggest holidays in South Korea, falls on Friday, resulting in a four-day weekend that started on Thursday.

Marking the day, the Hanbit unit in South Sudan invited 200 children living at refugee shelters in the war-torn country, as well as 30 officials of the United Nations and non-government organizations, to the base.

The soldiers then gave Taekwondo and traditional drum performances and had the kids experience several Korean folk games, according to the JCS.

The unit also set up temporary booths to offer medical support and gave out gifts like stationery and shoes, it added.

South Korea began deploying troops to the African nation in 2013 to carry out U.N. peacekeeping operations.

While maintaining a staunch readiness posture against terrorist threats, 350 service members of the Dongmyeong Unit in Lebanon shared some holiday cheer by staging a joint memorial ceremony for ancestors and enjoying holiday delicacies, according to the JCS.

They have been operating as part of the U.N. force in the conflict-ridden country since 2007.

Off the coast of Somalia, soldiers of the Cheonghae Unit also took the time to celebrate the holiday by staging events such as a joint ancestral rite and traditional games, while carrying out their anti-piracy mission, the JCS added.

Currently, more than 1,100 South Korean troops are operating on overseas missions in 12 countries.