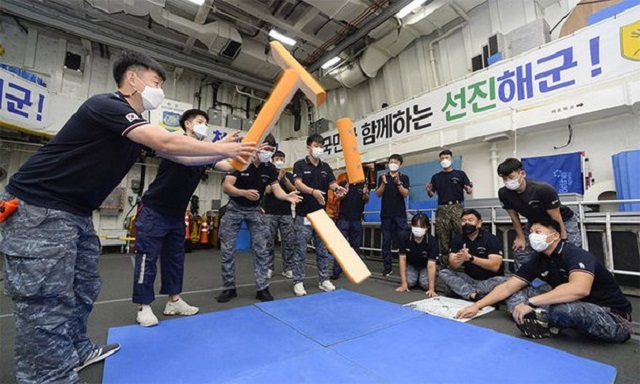 Service members of South Korea’s Cheonghae unit on anti-piracy missions off the coast of Africa play a Korean traditional game to mark the Chuseok holiday in this photo provided by the Joint Chiefs of Staff.

This year’s Chuseok, the Korean autumn harvest celebration and one of the biggest holidays in the country, falls on Tuesday, resulting in a five-day weekend that started Saturday.

South Korean soldiers overseas usually invite locals to their bases and hold events to mark the national holiday. But they are celebrating the holiday themselves this year to prevent the spread of COVID-19, according to the military.

From the Dongmyeong unit in Lebanon and the Hanbit unit in South Sudan to the Akh unit in the United Arab Emirates (UAE) and the Cheonghae unit on anti-piracy missions off the coast of Africa, troops held a joint memorial ceremony for ancestors and enjoyed traditional games at their respective bases, the JCS said.

“The Akh unit members spent the holiday while also preparing for a combined exercise with the UAE slated for October,” a JCS officer said.

Currently, some 1,000 South Korean troops are operating on missions across the globe for international peace and defense cooperation.