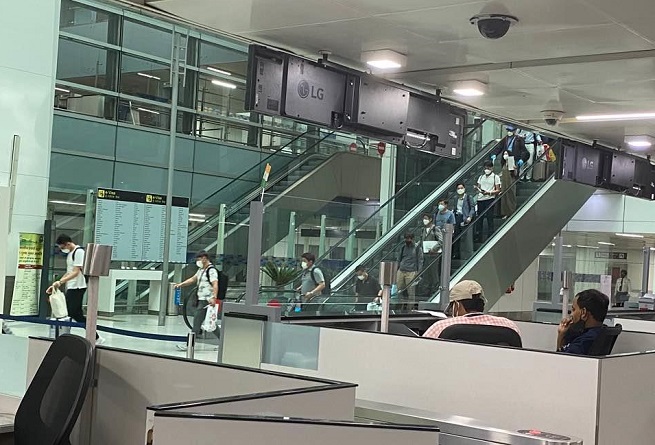 South Korean businessmen arrive at Indira Gandhi International Airport in New Delhi on June 19, 2020, in this photo provided by the Korea Trade-Investment Promotion Agency. India granted special entry waivers to people who needed to visit the country on important matters.

SEOUL, July 6 (Korea Bizwire) — South Korean workers and entrepreneurs are being permitted to bypass strict entry bans on foreigners to travel to South Asian countries where the coronavirus is rapidly spreading.

Despite the rampant spread of the virus in the region, South Korean workers and entrepreneurs are accepting the risk in order to do business there.

According to diplomatic sources, a special Asiana Airlines flight carrying 33 South Korean workers and entrepreneurs, including those representing Sejin Hitech Co. and Iljin Global Co., landed at Bengaluru in the southern part of India, at 2:10 p.m. on July 2.

On Wednesday, about 80 South Korean workers and entrepreneurs representing 31 companies including Doosan Heavy Industries & Construction Co. are scheduled to arrive in New Delhi, the capital of India.

The 80 individuals are key employees essential for the operation of Korean subsidiaries in India, and are primarily newly-appointed supervisors or engineers for repair and maintenance of production facilities.

In particular, India carried out a strict lockdown to prevent the spread of coronavirus, with air routes linking India to South Korea almost completely shut down.

Against this backdrop, the Korean Embassy in India and the state-run Korea Trade-Investment Promotion Agency (KOTRA)’s India Business Cooperation Center developed contacts with India’s diplomatic and aviation authorities and Asiana Airlines, and paved the way for the first government-led exceptional entry in South Asia on June 19.