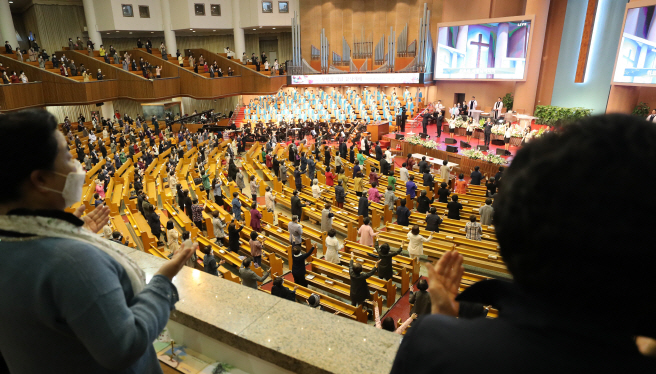 Congregants keep a distance sitting in pews during a service at Yoido Full Gospel Church in Seoul on April 26, 2020, on the first Sunday after the government eased rules on social distancing amid signs of slowing coronavirus infections. (Yonhap)

SEOUL, April 26 (Korea Bizwire) — People in South Korea gathered at some churches and temples for religious services on the first Sunday since the government eased rules on social distancing amid signs coronavirus infections are on the decline.

They, however, joined religious events in limited numbers without letting their guard down against the COVID-19 pandemic, while taking precautionary measures, such as wearing masks and keeping their distance from others inside buildings.

About 1,200 people attended a service at the main chapel of Yoido Full Gospel Church in Seoul. They applied in advance to attend it, but the number of those allowed is just a tenth the full capacity of the church.

Those people were asked to prove they are members of the church before entering for the service, wear masks and keep a certain distance when they sit in pews.

The biggest Protestant church in South Korea with some 560,000 congregants was set to hold seven different services at two-hour intervals throughout Sunday.

Myeongdong Cathedral in central Seoul also held Masses on Sunday with followers permitted to enter its building after having their temperature taken and personal information verified.

The Seoul Archdiocese earlier said that public Masses will be resumed at 232 chapels across the capital city. 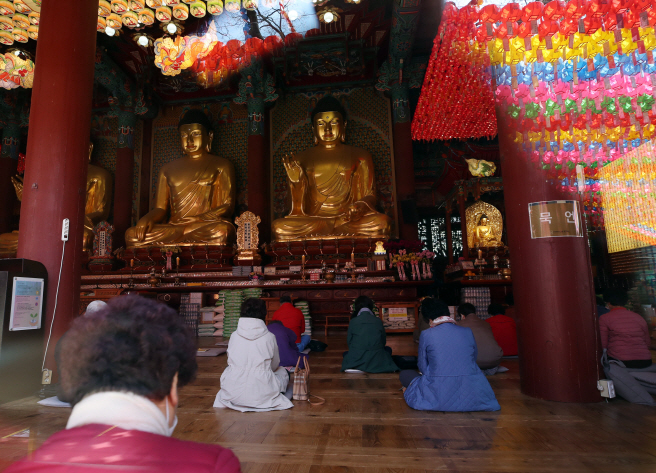 Buddhist followers attend a service at Joggye Temple in central Seoul on April 26, 2020, the first Sunday after the government lowered the intensity of its social distancing campaign amid a slowdown in new coronavirus cases. (Yonhap)

The Buddhist community resumed its community services as well.

Followers visited the temple of the Jogye Order of Korean Buddhism in central Seoul for a Sunday ritual, but they had their temperature checked before entering its main building.

Though some resumed their off-line religious gatherings, many still remained cautious by providing online services or “drive-in” ones held in their parking lots as part of precautionary antivirus efforts.

Religious groups in South Korea have scaled down services and provided them online to support the government-led antivirus fight by avoiding large-scale gatherings that could turn into new sources of infections.

On April 19, the South Korean government said it will keep social distancing rules in place until early May but decide to ease some restrictions for such religious gatherings amid signs the virus spread has been slowing down.

South Korea reported 10 additional cases Sunday, marking the eighth straight day that the number of daily infections has fallen below 15.

Concerns are still lingering that new clusters of infections could break out due to eased guidelines on social distancing and a long holiday that will start later this week, during which people could become overly lax as they travel throughout the country.