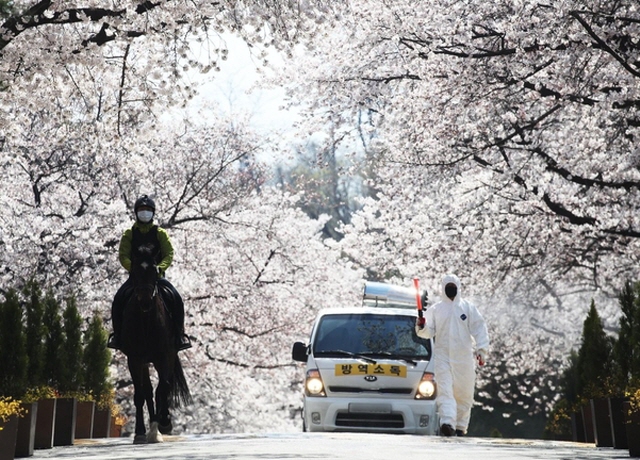 Disinfection is under way while a rider trains a horse for racing at the LetsRun Park Seoul in Gwacheon, Gyeonggi Province, on April 5, 2020. The park was closed due to the coronavirus. (Yonhap)

SEOUL, April 8 (Korea Bizwire) — Lee Ga-ram, 37, was forced to give up her decadelong annual ritual of having a picture taken of herself in the same spot at Seokchon Lake, one of Seoul’s most popular cherry blossom sites, as access to the park was closed due to the coronavirus pandemic.

“It is just five minutes away from my home, but I will miss my chance this time. Sticking to home with my fussy toddler all day long in this weather is just torture,” Lee said.

To give a brief moment of respite to those like Lee, the Songpa district office in southeastern Seoul has turned to online platforms such as YouTube and Facebook and is broadcasting the scenery live on a regular basis, the first such attempt by the local government.

To obtain better footage, the office has even flown drones.

It is one of many creative ideas South Koreans have tested out to celebrate the floral abundance while being under unprecedented social distancing guidance aiming at flattening the virus curve.

Most of the country’s major scenic spots were closed and festivals were canceled this year.

One of the most famous ones, Jinhae Gunhangje held in the southern city of Changwon, was also called off for the first time since its launch in 1963. Last year, it drew around 4 million visitors. 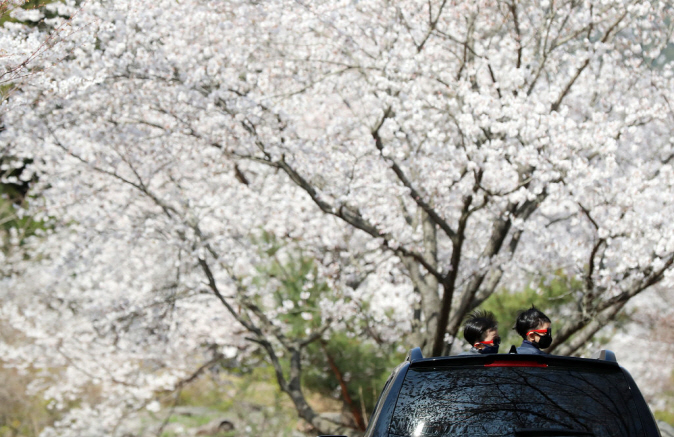 Two boys wearing masks enjoy cherry blossoms from the open sunroof of a car in the county of Boseong, South Jeolla Province, on March 31, 2020. (Yonhap)

Instead of simply barring public access, however, others introduced a “drive-thru tour program” after taking a cue from the country’s innovative way of testing for the new coronavirus.

“As Gyeongju has the largest community of cherry trees in the country, the whole city is like a blossom attraction. So the shutdown was not a viable option here,” an official of the southeastern city government said.

“Flower viewing is fine, as long as you don’t exit your vehicle.”

Police officers and volunteers were dispatched to guide traffic and to ensure that major parking lots remained closed.

Drivers are supposed to go slower along several key spots of the pink paradise, lest they not have enough time to view the landscape.

As parking is not allowed, the number of visitors on walking tours has decreased dramatically, according to Park Chan-young, chief of the Gyeongju Police Station.

A similar drive-thru program for a tour around Chungju Dam in central South Korea drew more than 15,000 cars over the past week alone, the local government said.

The central city of Cheongju came up with “one-way flower viewing” alongside the Musimcheon river, one of the city’s key cherry blossom spots.

Under the city’s administrative order meant to reduce contact among individuals, visitors are allowed to walk only one way, and wearing masks is a must. Parking along the stream or eating food is prohibited.

Despite restrictions and the subsequent inconveniences, many have shown positive responses.

“I had just taken daily walks around my community due to the coronavirus, but I learned of this drive-thru program in Gyeongju from a news report. I was able to view these puffy white flowers without wearing a mask and not being swept along in the crowd. It was just awesome,” read a blog post on the portal site Naver.

The blogger added that it couldn’t be better than to enjoy the flowers while listening to her favorite song, “Spring Day” by BTS.

“The lyrics go, ‘No season can last forever. Maybe it’s cherry blossoms, and this winter will be over.’ I hope this virus season ends soon,” she said. 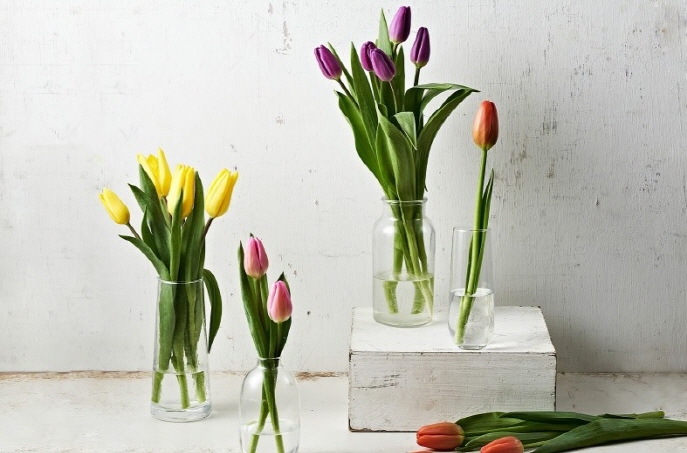 In this stay-at-home era, delivery or takeout is not just for food.

An increasing number of people want to bring home the symbol of spring, and related businesses have been scurrying to meet such demands.

Market Kurly, an online grocery delivery service platform, added tulips and freesias in late February to its list of products to be delivered by sunrise if they are ordered before 11 p.m. And it was a hit.

On the first day, one thousand boxes of tulips sold out in two hours, the company said, adding that more than 500 orders have been placed every day.

“It is not cheap as one box with five tulips costs 12,900 won (US$10.44), but it is worth the money because now I can and should enjoy them all day long at home,” 35-year-old office worker Kim Min-seon said.

She has been telecommuting since last month due to the coronavirus.

“I’ve often sent the flowers to my mom to help her feel better, as she has been in a bad mood recently,” Kim said. Her mom is particularly sensitive to the virus issue as she is in her 60s and has underlying conditions.

Online flower shops have also seen their sales rise this year, according to market trackers. Kukka, a local company specializing in a regular flower delivery service, said its sales in February and March this year nearly tripled from the same period in 2019.

“More people have complained of metal health problems while experiencing ‘abnormality’ due to the coronavirus. As the situation has drawn out, it is advised to actively seek new alternatives and strive to adapt to these unwanted, but unavoidable, circumstances,” said Kwak Keum-joo, a professor of psychology at Seoul National University.

Last week, the government announced its decision to further extend the social distancing campaign for another two weeks until at least April 19 amid the slowing but still continuing spread of the new coronavirus.

As of Tuesday, South Korea had reported 10,331 confirmed COVID-19 cases, including 192 deaths.