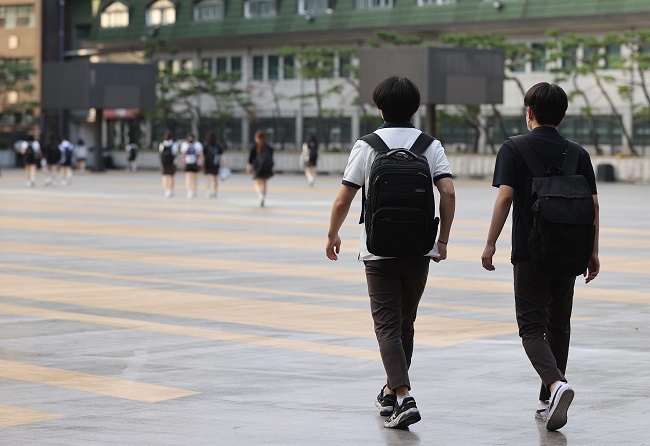 Students walk to a high school in Seoul amid the toughest social distancing rules of Level 4 on Aug. 10, 2021, after the end of vacation. (Yonhap)

As of 9 p.m., 2,021 new infections were confirmed nationwide, up 637 from the same time Monday, health authorities and local governments said.

It is unprecedented that more than 2,000 additional cases have been reported in a day in the country since it saw its first COVID-19 infection on Jan. 20 last year.

South Korea, which has a population of 52 million, has reported four-digit new infections for 35 consecutive days in the fourth wave of the pandemic.

Among the additional cases, 618 were reported in Seoul, 652 in the surrounding Gyeonggi province and 110 in the western port city of Incheon, accounting for 68.3 percent of the total.

Coronavirus infections were confirmed in all of the nation’s 17 major cities and provinces.

Small and large infection clusters, including those involving the highly transmissible delta variant, have been spreading from the Seoul metropolitan area to other regions in the midst of the summer vacation season.

The daily count of new infections in South Korea jumped again to around 700 in late June and exceeded 1,000 for the first time on July 7.

Epidemiologists here warn that the virus wave may continue to worsen for the time being amid no signs yet of peaking.

On Tuesday morning, the Korea Disease Control and Prevention Agency (KDCA) stated that 1,540 new COVID-19 cases were confirmed and the nation added nine deaths from the virus through Monday.

Cases in the greater Seoul area reached 818, with 356 in Seoul, 398 in Gyeonggi Province and 64 in Incheon, about 40 kilometers west of Seoul, which accounted for 55.4 percent of the locally transmitted cases.

The authorities decided to extend the Level 4 distancing measures, the highest in the country’s four-tier system, for the greater Seoul area until Aug. 22, with most other areas under Level 3.

The Level 4 restrictions ban gatherings of more than two people after 6 p.m., and place a 10 p.m. curfew on restaurants and cafes.

The highest social distancing measures are being applied in the country’s second-largest city of Busan from Tuesday until Aug. 22 as cases have surged in the city in recent weeks.

In a bid to help people returning from vacation more easily take virus tests, four temporary screening centers will be operated at highway service stations from Friday until the end of August, the authorities said. 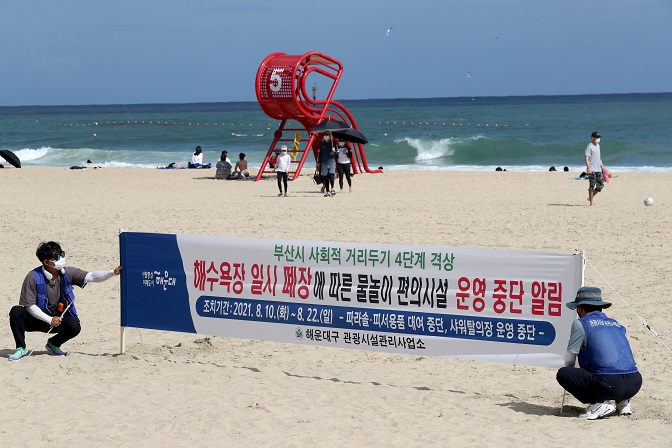 Workers put up a banner to announce the closure of Haeundae Beach in Busan, 453 kilometers southeast of Seoul, on Aug. 9, 2021, amid spikes in COVID-19 cases. (Yonhap)

Of the newly confirmed variant cases, 96.7 percent, or 2,555 of them, were the delta strain of the new coronavirus.

They also said that there were 1,540 breakthrough cases among more than 6.5 million people who had received the full-dose vaccine regimen.

A breakthrough case means that a vaccinated person has tested positive for the coronavirus.

Of the total, 746 were administered with Johnson & Johnson’s Janssen COVID-19 vaccine, followed by 420 with Pfizer’s and 340 with AstraZeneca’s.

Since the country launched its vaccination program in late February, a total of 21.37 million people, or 41.6 percent of the country’s 51.3 million population, have received their first shots of COVID-19 vaccines.

Around 15.4 percent, or 7.89 million people, have been fully vaccinated, according to KDCA data.

Advance reservations for vaccinations for people aged 18 to 49, estimated at some 16 million, started on Monday.

The vaccine supply may face a shortage this month as Moderna failed to provide the planned doses of COVID-19 vaccines.

There were 64 cases from overseas arrivals.

The total number of people released from quarantine after making full recoveries was 187,523, up 1,281 from a day earlier.