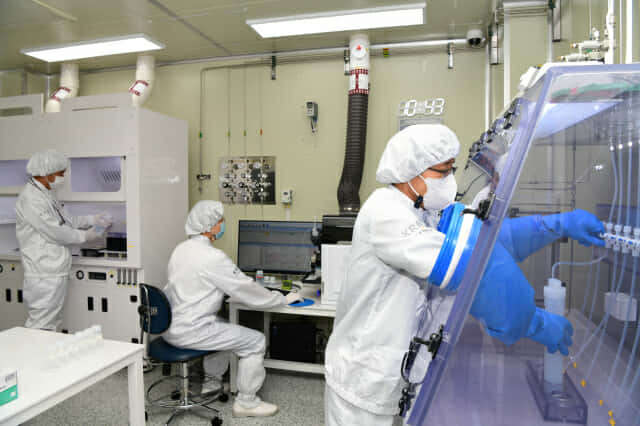 This file photo, provided by the Korea Research Institute of Standards and Science on Sept. 22, 2020, shows researchers carrying out a quality evaluation of hydrogen fluoride.

SEOUL, July 20 (Korea Bizwire) — South Korea’s dependence on Japanese materials and parts fell to an all-time low in the first half of this year, three years after Tokyo’s control of exports of key materials bound for Seoul, data showed Wednesday.

Imports of Japanese materials, parts and equipment came to US$20.07 billion during the January-June period, accounting for 15.4 percent of South Korea’s overall purchase of those goods, according to the data from the Ministry of Trade, Industry and Energy.

It is the lowest figure for any half-year period since the government began compiling related data in 2012.

The comparable figure for the first half of last year came to 24.2 percent.

In July 2019, Japan imposed tighter regulations on exports to South Korea of three materials that are critical for the production of semiconductors and flexible displays.

Since the curbs, South Korea has enacted a special law and extended various supportive measures to help South Korean companies boost the competitiveness of the sector.

“We’ve seen achievements in several projects meant to domestically produce key items,” a ministry official said. “We expect to further reduce our reliance on Japanese items down the road.”