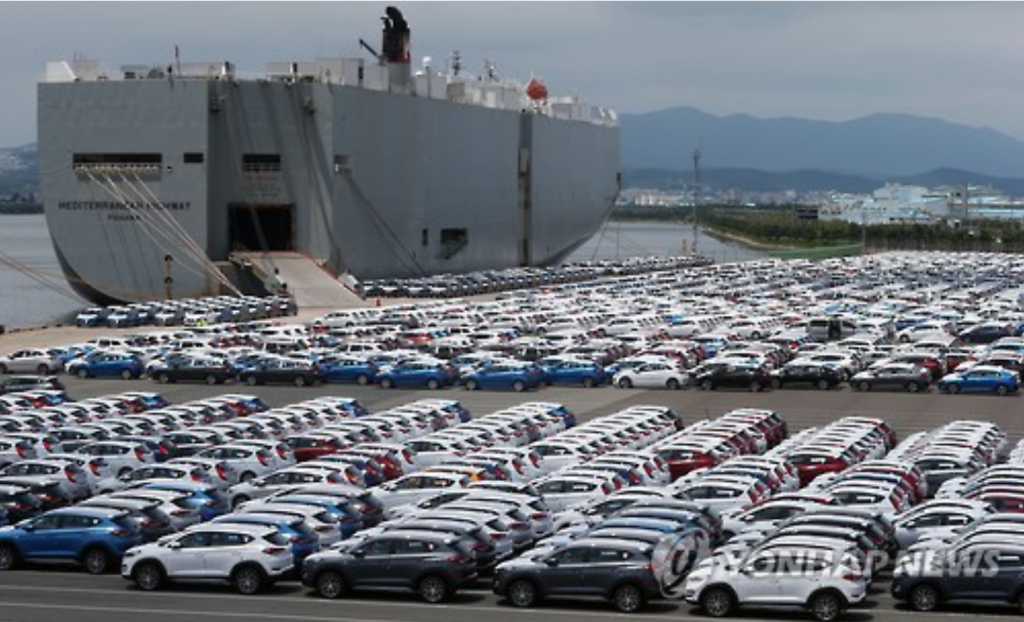 “A drop in car sales weighed heavily on consumption data, due to the end of the government-led tax-cut program and partial strikes at automobile firms.” (image: Yonhap)

Production in the mining, manufacturing, gas and electricity industries fell 2 percent last month from a year ago, according to the report by Statistics Korea.

The September figure marked a drop for the first time in five months, following a gain for four straight months.

From a month earlier, industrial output edged up 0.3 percent in September, however, on a gain in electronic parts.

Production in the service sector added 2.8 percent last month from a year earlier, with a 0.6 percent on-month drop.

For all industries, output moved up 1.3 percent on-year in September but retreated 0.8 percent from a month earlier, the report said.

Private consumption showed signs of slowing down as it climbed 0.5 percent on-year in September, the slowest pace since January 2015, when it fell 2.4 percent. From a month earlier, consumption also slid 4.5 percent, marking the steepest on-month decline in nearly six years.

“A drop in car sales weighed heavily on consumption data, due to the end of the government-led tax-cut program and partial strikes at automobile firms,” said Eo Woon-sun, director of the short-term industrial statistics division at Statistics Korea. “Contracted demand for foodstuffs and home appliances also affected the sharp drop in consumption.”

The South Korean government had run the excise tax-cut scheme on passenger cars for nearly a year in a bid to boost domestic demand and prop up Asia’s fourth-largest economy.

But the program finished at the end of June, dragging down overall car sales to a large extent, coupled with monthslong partial walkouts at major carmakers, including industry leader Hyundai Motor Co.

At the same time, the production side was also influenced by sluggish demand for cars and the worldwide recalls and the production halt of Samsung Electronics Co.’s Galaxy Note 7, both of which are the country’s key industrial items.

Output of automobiles slumped 14.3 percent in September from a year earlier and that of communications equipment, such as mobile phones, tumbled 21.1 percent on-year, offsetting a 2.8 percent gain in chips.

“Strikes at local carmakers and the Galaxy Note 7 case were the main factors for the September decline,” said the official from Statistics Korea.

South Korea saw its outbound shipments fall 5.9 percent in September, recording the 20th month of negative growth in the past 21 months, amid contracted world demand and a low oil price trend.

The finance ministry expected industrial output to rebound to some extent as the strike at Hyundai Motor ended earlier this month following a wage deal between the management and labor.

“Uncertainties are rising at home and abroad, stemming from the production stoppage of the Galaxy Note 7 and a possible U.S. rate hike,” the ministry said in a release. “But the government-sponsored sales event and the end of Hyundai Motor’s strike will play a positive role in the coming month.”