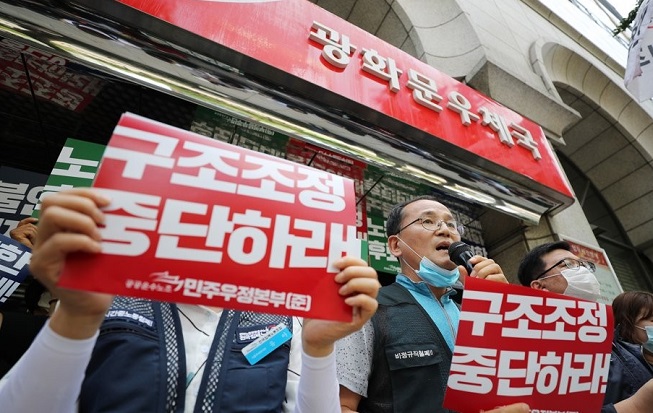 Unionized workers of the Korea Post, the office of the postal service, hold a press conference in front of the Gwanghwamun Post Office in central Seoul on July 4, 2020, calling for the suspension of restructuring and improvement in working hours. (Yonhap)

SEOUL, July 20 (Korea Bizwire) — South Korea’s mail volume fell at the biggest-ever pace in the first half of the year as the coronavirus outbreak sharply reduced demand, data showed Monday.

Mail volume in Asia’s fourth-largest economy came to 1.59 billion pieces during the January-June period, down 8.9 percent from a year earlier, according to the data from the Korea Post.

The figure was the largest-ever on-year decline and much higher than the 5.3 percent on-year drop recorded during the same period last year.

The previous record was set in 2016 when mail volume dropped 6.2 percent on-year. South Korea’s mail volume had been on a steady decline since 2011.

The Korea Post attributed the tumble to the expansion of “untact culture” and the rapid digital transformation during the COVID-19 pandemic.

“Demand for mail declined as the new coronavirus outbreak has prompted companies and people to resort more to online and mobile alternatives,” the postal service said.

The data showed international mail posting the biggest on-year decline with 35.5 percent in the first half, followed by ordinary mail with 9.5 percent. Parcels fell 1.4 percent on-year.

The Korea Post said its mail-related sales shrank 0.2 percent on-year to 1.45 trillion won (US$1.23 billion) in the first half, the first on-year decline in three years.

The Korea Post lost money for the ninth consecutive year in 2019 due to increased labor costs.

A Korea Post official said it would be inevitable for the postal service to report a loss this year due to the fast spread of untact culture and digital transformation.