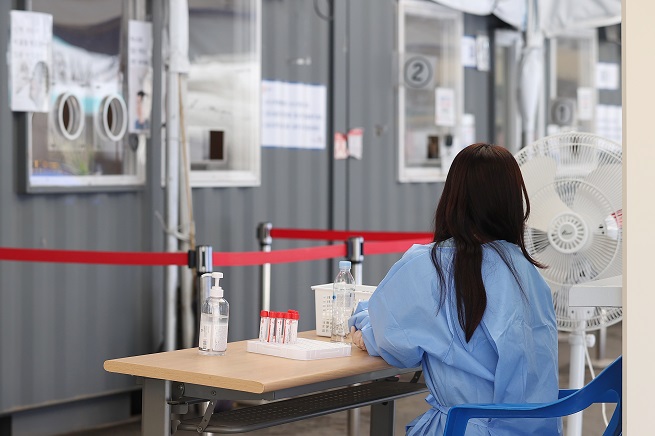 A medical worker sits at a makeshift COVID-19 testing station in Seoul on June 6, 2022. (Yonhap)

The country added 6,172 COVID-19 infections, including 35 cases from overseas, bringing the total caseload to 18,174,880, the Korea Disease Control and Prevention Agency (KDCA) said.

The daily cases have been on a steady decline since mid-March when the daily caseload had spiked to over 620,000 amid the fast spread of the highly transmissible omicron variant.

The number of critically ill patients came to 117, down from 129 the previous day.

As of 9 p.m. Tuesday, the country had added 12,824 new cases, more than double the 5,832 cases reported at that time a day earlier but down 2,398 cases from a week before, according to local governments and health authorities.

As of Tuesday, 44.59 million, or 86.9 percent of the population, had completed the full two-dose vaccinations, and 33.32 million, representing 64.9 percent, had received their first booster shots.

More than 4.18 million people, or 8.1 percent, had gotten their second booster shots, the KDCA said.

Last week, the number of average daily infections came to 12,320, down 33.3 percent from a week earlier, according to the KDCA.

Of the cases confirmed last week, those in their 20s accounted for the largest share, followed by teenagers and those aged below 10, which appears to have been caused by growing outdoor activities after the government’s lifting of social distancing rules. 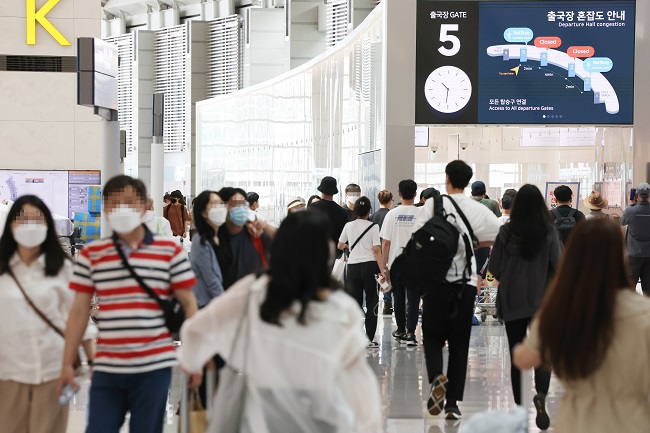 The departure terminal of Incheon International Airport, west of Seoul, is crowded with passengers on June 5, 2022. (Yonhap)

The authorities warned of a possible upturn in infections in summer and called for adhering to basic antivirus measures, such as wearing face masks.

The authorities found an additional 25 cases of the omicron subvariant BA.2.12.1 here last week, bringing the total caseload to 88.

The KDCA also found two cases of the subvariant BA.4 and four cases of another subvariant, BA.5, last week, all of which were found among foreign entrants.

Meanwhile, the health authorities are in consultation with a foreign vaccine company to bring in a monkeypox vaccine amid the possible inflow of the virus.

The vaccine under consideration appears to be the one developed by Danish vaccine company Bavarian Nordic.

Last month, the KDCA decided to place monkeypox on the second level of contagious diseases out of a four-tier scheme in the wake of the fast spread of the virus across the globe, which has traditionally been confined to Africa.

Currently, COVID-19, cholera and other contagious diseases are listed in the second-highest tier in South Korea.