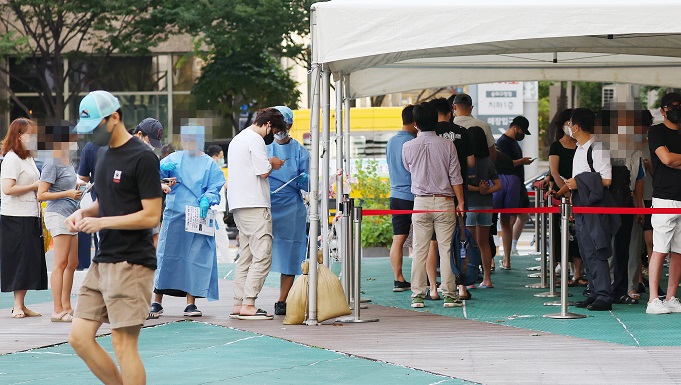 People line up to undergo COVID-19 tests at a makeshift testing station in Seoul on Aug. 16, 2022. (Yonhap)

Health authorities had confirmed a total of 175,765 new infections nationwide as of 9 p.m., the highest since April 12 when there were 192,077 new infections.

The tally was up by more than 94,000 cases from the same time a day ago. South Korea had a long weekend for the National Liberation Day which fell on Monday.

Earlier in the day, the country reported 84,128 new COVID-19 infections, including 463 cases from overseas, bringing the total caseload to 21,502,164, according to the Korea Disease Control and Prevention Agency (KDCA).

New daily infections fell below the 100,000 level Monday for the first time in a week to come to 62,078. The decrease is mainly attributable to fewer tests over the extended weekend.

But the number of critically ill patients came to 563, up from the previous day’s 521. Tuesday’s figure is the highest since April 26, when the country reported 613 serious cases.

COVID-19 deaths and critical cases have been rising markedly in recent weeks as the country has experienced a new virus wave amid the fast spread of the omicron subvariant BA.5 and the government’s lifting of virus curbs.

The KDC said that new virus cases may peak at around 200,000 this month before shrinking at a slower pace, calling for close monitoring of the trend over the potential impacts of the summer vacation season and recent unfavorable weather conditions. 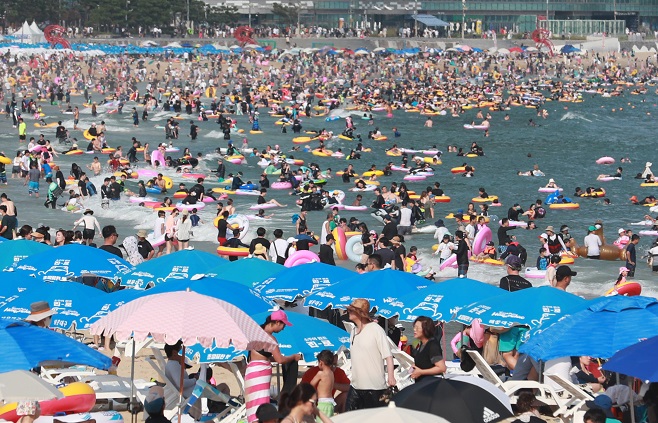 The country experienced the worst virus wave earlier this year, with the daily tally peaking at around 620,000 in mid-March. The cases had been on a downward trend before rising again since around July due to the spread of the omicron subvariant BA.5.

BA.5 accounted for 87.9 percent of total infections last week, up 11.6 percentage points from a week earlier, the KDCA said. It became the dominant variant in South Korea in the fourth week of July.

As for BA.2.75, a new highly infectious omicron subvariant, the country has seen 55 cases so far, according to the health authorities.

The number of reinfected people has also gone up, reaching 183,617 cases as of the first week of August, accounting for 0.91 percent of the total so far.

During the first week of August, reinfection cases took up 6.11 percent of the total weekly infections, slightly up from the previous week’s 5.43 percent, the KDCA said.

“The pace of the virus growth has slowed down, but we have still seen a constant rise in infections. … We should remain vigilant to better protect high-risk groups, including elderly citizens,” KDCA Commissioner Peck Kyong-ran said.

To better deal with the situation, the government plans to announce a plan by the end of this month on the possible introduction of an updated version of Moderna’s COVID-19 vaccine, which targets the omicron strain, according to the KDCA.

Based on the results of the ongoing preliminary analysis, the KDCA will devise detailed plans, including when and how many volumes to introduce, Peck said, adding that the official process for the potential approval is yet to begin.